Okay, these pics are just too bunny-cute...yep, on found Pinterest.

This was a flash written during the 2012 Spring Equinox about Sadie, a rabbit shifter on a mission of sweet revenge.

HAPPY EASTER, Everyone. And as I said back on March 20, 2012... May Springtime bring you joy and a beautiful connection with our Mother Earth.

Yes, I'm still doggedly editing/revising my SHAPESHIFTER SEDUCTION manuscript ~Waiting For a Filly Girl~ The Prologue – or I might change it to the first chapter – had been completed – I've had to do a bit of revising around that change... and because Keina and Drev's love story has been updated to Wolf Peak Territory, rather than Talbot Peak. Anyhoo, I wish it would all go much faster for the obvious reasons. However, life simply isn't cooperating too well, at this time. 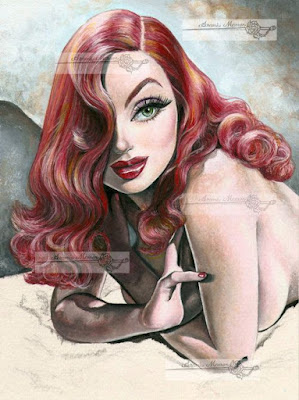 Running of the Buck Rabbits

Competing with the raw green smells of Springtime, the fast heated blood of rabbit shapeshifters tantalized Dante's nostrils as they morphed to human form. Their rapid heartbeats called to his wild wolfen nature, and he mentally licked his chops.

Instead of giving chase, Dante merely shook his head as he observed the gathering of the two rabbit clans from atop an outdoor stand, disguised to look like it belonged to human hunters. Yip-yip awoooo, the first day of Spring, what else did he expect? When the bunny bucks turned March-mad with the need to hump and mate.

Only it wasn't the four strapping bucks who would fight for a mate on the vernal equinox of 2012. No, Dante had never witnessed this type of 'gamechanger' role-reversal between the sexes. Not once during his lengthy worldwide travels.

So, yeah-howl, he'd had a big paw in bringing it about, though, all to help the little bunny shifter, Sadie. She was an excellent server at the Midnight Stardust Supperclub. So, when she'd come to him with those big brown eyes of hers, and her sweet round face, asking him to keep the peace between her clan and another local clan, Dante hadn't been able to refuse.

Immediately, Blade Runner gained agreement on the rules for the Sadie Hawkins like event, meant to ease tensions between the two rabbit shapeshifter clans. With his carefully chosen team, he'd laid out the miles' long course through the surrounding forest, then placed observation stations along the challenging terrain.

Blade Runner had also appointed himself the official referee. There'd been little argument from the two buck clan leaders, especially after their mates eyed them. Dante had grinned to himself watching the wifely warning -- also the silent promise of mating pleasures later.