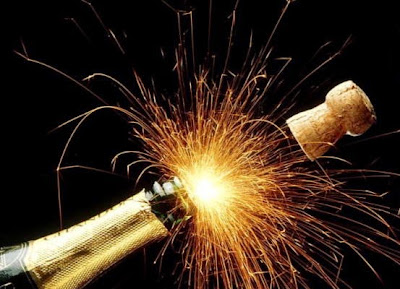 Have a Prosperous and Healthy New Year
at SHAPESHIFTER SEDUCTIONS ~

Happy and Cozy New Year's Day, sweet and feisty Kittens... brrr-shiver-cold on the tame prairie today... so, mere hours before the midnight hour and 2015 comes barreling in, goes whizzing by, then goes out with one heckuva bang... and yes, this Big Cat wouldn't mind a champagne cork-popping, elegant evening out... however, she's also happy to be safely ensconced in her home with her loved ones.

The year 2015 is an EIGHT year [2+0+1+5=8]. Look for major power plays around money and the seeking of wealth far beyond what is already bigtime-happening. For, the Mighty Moneymakers will rise like shooting stars, and will also crash-bam-boom fall into the mouths of blackholes, and be swallowed into oblivion.

The high-life and glamor will make a huge return, and this will not only be for the rich and famous. Many are tired of living on the edge of poverty, of existing in a realm of trendy austerity -- or of only living the casually dressed, 'on the go' urban lifestyle. Dressing up again in quality, high style garments will appeal to a whole new group in the population, which will be formed out of every class, color, and creed.

Going back to the basics will also appeal to some, and they will abandon the crowded big cities for a rural lifestyle that brings them much closer to the land, and back to nature. They will be growing their own gardens, milking their own cows, and/or raising their own chickens.

Also, TV watchers will become fewer and fewer as the year progresses. And there will be a great rise in community-inspired activities.

Okay, that was just a little preview of 2015, most darling kittens. May you live the truth and dreams of your heart. And remember, this Big Cat loves ya!
~~~~~~

We at SHAPESHIFTER SEDUCTIONS are working on the January newsletter... kilt images will be included.
~~~

Coming: MM Winter Fantasies Contest
Hey everyone, the Kougar's alter ego, Stevie Klark will be participating in Stormy Glenn's month-long Winter Fantasies Contest ~manlovefantasies.blogspot.com~
Don't miss the interview with one of the heroes, Grant Thunderhead. He talks about life after his happily ever after, and one of his on-the-quiet plans for the new year, 2015.
There will be character interviews galore, and a whole lot of fabulous prizes. All you have to do is come on over and enjoy.
~~~

READERS! ***ALL ROMANCE EBOOKS*** HAS A GOOD DEAL FOR NEW YEAR'S DAY ~

Tomorrow (January 1 US/Central), there will be a one day 50% rebate on select titles. Your titles all qualify. Customers will pay the full listed price using credit card or Paypal and we will give them back 50% of the purchase price in eBook Bucks, our in-store currency. Customers will be able to use those bucks toward future purchases. ~allromanceebooks.com~
~~~

“Merle, have you noticed something has been off the last few months?” Jennifer said casually as she tallied the ticket stubs from this year’s Nativity Petting Zoo. It was pretty much exactly like their Rest of the Year Petting Zoo except that the animals were in an in-door barn that was decorated like Jerusalem rather than in a rodeo stock yard and the handlers were dressed in Jewish robes rather than Wranglers and cowboy shirts.  It was usually a money maker in both its versions but since the early fall, it hadn’t been doing so well.
~~~~~~

ALL KINDS OF YEAR-END FABTASTIC UFO AND PARANORMAL STORIES 'NEWS' ~

Rockefeller Museum Alien Artifacts (Video of Spaceships Beaming Lasers on Rocks) (video)
CONTRIBUTOR: LavenderRose - Before Its News . LavenderRose How cool is this rock showing spaceships and it looks like a laser weapon is beaming out. ?Egyption Caves in the Grand Canyon Alien-abductions-and-hybrids-dr-david-m... -ancient-flying-machine-from-afghan-cave- jim-marrs-on-secret-societies-faked-moon-land... ?Contact Has Begun A True Story From James Gilliland Different Aliens Here with Different Agendas? ?LEAKED UFO...~beforeitsnews.com/space/2014/12/%E2%98%85rockefeller-museum-hides-alien-artifacts-from-jerusalem-video-of-spaceships-on-rocks-2486818.html
~~~~~~

Huge fireball lights up East Coast
The fireball was seen from Montreal, Canada to Maryland and Delaware. — MyFoxNY.com
~~~~~~

WHAT WE'RE REALLY CAPABLE OF 'NEWS' ~