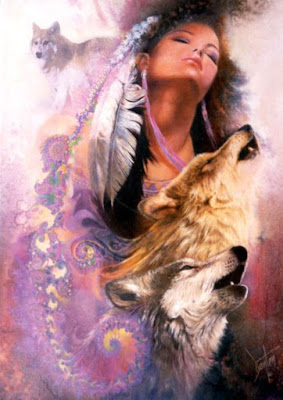 Song of the Golden Wolf ~ Art by Denton Lund

Omygoodness, what a week, and now it's already Monday. It's been stress and more stress for the most part. The good news is the temps have remained nice and on the cool side.

Ever found a mouse in your mailbox? A few days ago when I opened the mailbox, I got the mail... and then I saw a tiny hunched up creature at the very back ... I stared determining it was a mouse. Well, I closed the box wondering if I should chase the mouse out... but it's a long jump down. Anyway, I opened the mailbox again and looked at mouse, who looked back and looked darn frightened. It was not a field mouse, but I think one of those kangaroo mice. Anyway, since there was a large enough space for the mouse to get out, I decided to just leave it alone. Maybe it was escaping a predator? And no, Mouse wasn't there the next day. But how it got up there in the first place, I don't know.

Another animal event on my tame prairie, a three-foot snake made an appearance where I like to hang out the laundry in the summertime. Given Snake was not poisonous, and definitely not moving, I just tiptoed around her/him. Later when I returned Snake had vanished. Was that a Spirit message from Snake? I don't know.

If Snake has slithered into your life…

Transmutation is the key word here. The shedding of old skin and emotions and transforming them into something bigger and better. If Snake winds itself into your life know that change is in the wind and that you are at the center of it all as the catalyst. Make sure that your intentions are clear and that you have clear a clear sense of the direction that you need to strike out in. Snake is letting you know that these changes are safe and that there is no need to fear them.
You are also being reminded to stay connected to the self through observation of both the tiny vibrations in the earth, and the warmth and smells of the air and sky. When we learn to connect with our surroundings we can continue on the path of growth, and discard the trappings of the past.

And, this was a great, most fascinating read:

Meet The Man Who Lives With Hyenas
This remarkable relationship between man and beast has been kept alive for 50 years thanks to one family's tradition.
http://www.nationalgeographic.com/photography/proof/2017/08/this-man-lives-with-hyenas

Yes, I managed another two hundred words of my ongoing flash-scene story. The previous flash scenes can be accessed above. Just click the tab for the page.


XVII
"Good doggie. Good wolf," Kassy crooned. "How did you get in here?"
Is he smiling? Sure looks like it.
His wet nose touched the tip of her nose like a kiss. Then his intent gaze blazed on her again.
"Are you friendly?" He nosed her cheek with obvious affection. "I guess you're not going to eat me, huh?"
Okay, for real, he shook his head 'no'.
"Gold dust. You look like your fur is dusted by flakes of gold." Unaware she'd raised her hand, Kassy lightly stroked his ruff. "Your head is haloed by a golden light. How is that?"

XVIII
Zorzun longed to shift to human. Fiercely longed to answer his woman's question. Howls, he already loved her touch. However, transforming to a man wasn't a good idea, not with her fragile health. Besides morphing would frighten her terribly.
"Not much sunlight in here," she murmured. "But you're still golden." Lightly she threaded her fingers through his coat. "And your fur feels incredible. You know I like dogs...and wolves."
She paused, frowned a bit. "Do you need a home?"
Zorzun nodded.
"I still can't understand how you got in here. Everything is locked."
Magick, he spoke to her mind.

Flame-golden eyes burned into her ... Summer of Her Golden Wolf 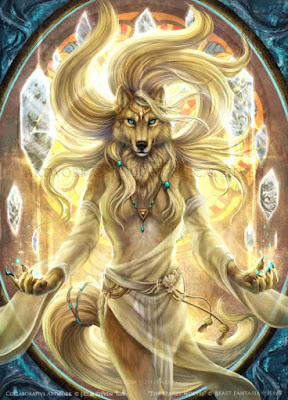 The Mystic Wolf Woman of Wolf Peak Territory ... Zorzun Is In Her Pack

The temps are so cool on the tame prairie right now, during the rain and rainstoms, that I have wrapped a light blanket around myself as I pen this post. How exciting, right? Well, it is since I survived the horrible high humidity just a week or so ago. It seems like the autumn temps arrive earlier each year. August has typically been heat, hot, dry brown grass...no more! Not for the last four years, or so.

So, a cute toadikans, a young one, came to visit again by hopping on the window sill. I always enjoy telling toads how cute they are...and they often listen, not moving, looking at me with those big black eyes. Since I didn't want toadikans to get into the house, which I explained, I gently tried trapping adorable toad. That happened, except as I uncovered toad he/she made a sharp u-turn hop into the house... well, being inside is dangerous for a toad. For one thing I might accidentally step on him/her, not seeing the little critter. Thus, I made another attempt determined to release toad to the wilds outside. Fortunately, I caught toadikans again managing to place him/her out the window far enough so hopping back in couldn't happen.

HOWEVER, I did manage another two hundred words of my ongoing flash-scene story. The previous flash scenes can be accessed above. Just click the tab for the page.

XV
Too weak, Kassy didn't try to get comfortable. From a dead sleep, she jerked awake. Flame-golden eyes burned into her. Her heart stopped, then pounded. Is there a wolf staring at me...am I dreaming?  Before she could blink or think, a tongue licked her cheek softly. Even in the dim interior she could see a wolf face...unless this was a dog-wolf hybrid. But how in the hell could it have gotten inside? Was it going to eat her? Again, the animal's tongue touched her cheek, as if to calm her. "Nice doggie," she tried, given his expression seemed benign.

XVI
As full golden wolf, a form beyond wolf, Zorzun covered his woman's body gently with his. Sniffing, he blew his breath against her face. Her scent activated his supernatural healing ability. Even though, he didn't know the cause of her ailments, his force enveloped her,  penetrating. Zorzun realized many such healings would be needed to return her to vibrant health. Quickly, he determined why. Over a lifetime she'd been severely damaged by the poisonous pollutants blanketing Earth. Her body was too sensitive. She was so ethereal in nature that her tolerance remained low. Her eyes flew open. Beautiful Caribbean-azure eyes.