Happy Year of the Fire Cock 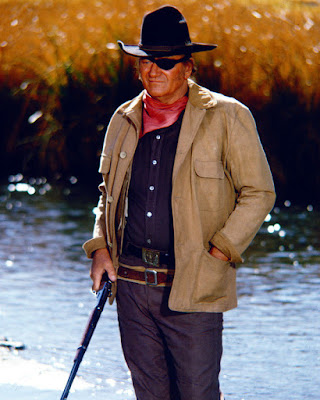 A Fire Rooster Hero ... now there's a characterization to please a heroine. I should create one for Wolf Peak Territory ... oh for enough time! Oh, and this just hit the ole brain—what about Rooster Cogburn, the irascible western hero John Wayne played in "TRUE GRIT"?

Dale Vilogo shut the door of his Dodge Ram pickup with a flick of his wrist. Saturday night, and like he figured, most of the townfolk poured inside the country western bar and danceclub. The vintage brick building dominated half a block.

The first stars of night twinkled, and reverence for the heavens filled him as always. But yep, sure enough, there was his shooting star. A blazing flash across the darkness. Then gone.

Ever since his days as a kid on his family's ranch, he'd had an uncanny knack for seeing fireballs. One summer he'd counted over a hundred meteorites streaking across the black starry skies.

It was purely magic. No matter the science behind the atmosphere-burning meteors, every sighting quickened his heartbeat—felt magical to him.

Yep, no doubt, luck was his companion tonight. Dale grinned wide striding for the entrance of the Thunder Corral.