Winter Woman of the Battle Sword 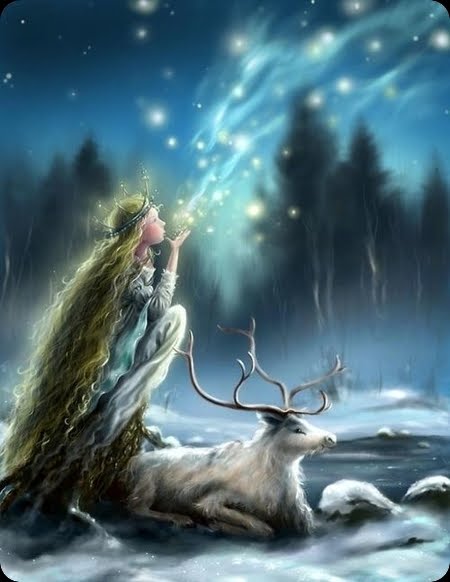 Meet the latest heroine who now lives in Wolf Peak Territory, Saxia. I began writing a flash scene about this warrioress, one I hope to finish and post on this blog. ~hope, hope~

Yes, the title is: Winter Woman of the Battle Sword

Anyway, Saxia trains women in the use of a battle sword, whether ground fighting or on horseback. She has fit in wonderfully with the other warrioresses who have made the Peak their home.

Although of late, Saxia is experiencing a big case of loneliness. She also feels out of place during the holiday season, celebrated with great gusto in the Peak, and of course, in the small town of Moonrise Lake.

This is because her home culture is quite different in certain ways. No, Saxia isn't a shapeshifter, either. Yet she does own certain supernatural abilities common to her ancestors.

Above in this gorgeous image... this is Saxia as a child with one of her guardian riding stags--she has two. They were given to her at the time of her birth.

Saxia also has two giant-sized white wolves to watch over her. She has two magnificent white war horses, stallion and mare. And two huge polar bears that have been especially bred over the ages as protectors for her people.

Saxia's clan is from a remnant population that once occupied the land of Hyperborea. To quote from many articles: "In Greek mythology the Hyperboreans were a race of giants who lived "beyond the North Wind."

In those very ancient times, Saxia's people escaped a catastrophic event on Earth. Currently, they dwell inside a chain of enormous, crystal-shining caverns. Away from the human population on Midgard, or topside Earth.

Saxia chose to live on Upper Earth for several reasons, one being she adores bathing in the warm light of Sol, or what we call the sun. Also, she deeply felt the calling to teach those in Wolf Peak Territory her olde world knowledge, and her battle skills. To contribute to their incredible thriving community, one that is helping to save everyone, every being on Earth from a massive evil force that would parasitically feed on, and enslave humanity.

Of course, Saxia has a hero... but that's for another post. Hopefully... and hopefully I'll be able to post a Winter Solstice blog next. And maybe, just maybe I'll be lucky enough to finish this flash scene... maybe...

Posted by Savanna Kougar at 1:23 AM