"What are you gonna do about that man?" 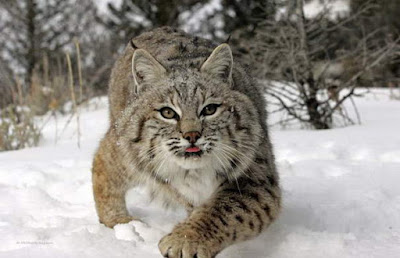 Wednesday howls and yowls, shapeshifter lovers.
Okay, warmer temps on the tame prairie for right now, at least. And even sunny skies today.
So, finally got this week's flash scene written. It's a continuation of Sheriff Roy and his bobcat beauty, Xanya's love story. They do have a definite 'thang' for each other, alright. Their animal-shifter chemistry has been perfuming the diner.
Okay, this flash is from Xanya's POV. ~~~~~~

"What are you gonna do about that man?"
Xanya bustled back from the table of four she'd just served with breakfast platters fit for felines. They were Siberian Tigers, and rumor had it the four—two men, two women—were long lost relatives of Serghei, a WFF mountain of a man, who was an assassin working for Zhere Ghan, leader of the Tiger Yakuza.Zhere Ghan's luxurious, isolated compound was located deep in a rock-infested, forested area, and his ninja soldiers patrolled the surrounding area in concert with Dante's perimeter patrols of Wolf Peak Territory. No one doubted the Ghan's criminal brand of ruthlessness. Yet, of late the elder tiger shifter seemed content to rule his empire, and let sleeping wolves and dogs lie.As Xanya understood it, two years past Zhere Ghan had allied himself with Dante against a greater enemy, the Ophylus, a secret, octopus-tentacle organization devoted to exterminating every last shifter on planet Earth."What are you gonna do about that man?" Jess asked, interrupting Xanya's thoughts. She gave a nod toward Sheriff Roy.