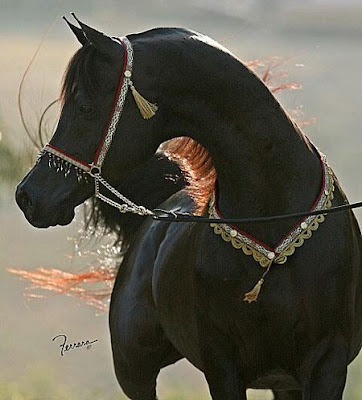 Pictured above is a black Arabian stallion. He's certainly a shapeshifter hero I'd love to pen a story around. Of course, Mr. Beautiful Black Arab lives in Wolf Peak Territory, one of several horse shifters. And yes, as a youngster, I read all the Walter Farley Black Stallion novels -- some of my absolute favorite books!

Okay, it's been a difficult week just in dealing with internet connection problems...sheesh! Yep, that really cuts down on daily productivity...yeah, as far as getting the normal stuff done. Be that as it may, my time to write has obviously been negligible of late...big ole disappointed sighs!

Also, between health challenges and care-taking duties...wow, it just ain't happening. However, the ideas are still flowing for Wyoming Wrangler, and those get written down.

Here's a raw, unedited scene. Dale and Symone are conversationally getting to know one another.

"Paranormal," he tossed out, keeping his voice casual enough. "Do you believe?"

"I suppose that depends on which paranormal topic we're discussing." She gave a cute little shrug. "What did you want to talk about?"

"The animal spirit within." Dale figured he'd straight shoot her—as much as possible. For now.

"Do you mean like a totem spirit animal? Or an animal guide?" Interest lit up her eyes, made her face even more adorable.

"In a manner of speaking. What do you think about shapeshifting to an animal form?"

"The skinwalker legends? Or..." she smiled, a mix of embarrassment and sweet sexiness, "shapeshifting like in the paranormal romance novels."

"Paranormal romance novels," Dale intentionally repeated, using a purring, intimate tone. He leaned closer, immersing his gaze in hers. "What about an inner animal? One that can manifest," he paused, "separate from a person?"

"Do you mean like in "The Golden Compass...the daemons?"

"That idea. But different."

She stilled and remained silent. Yet, she'd locked her gaze with his, and he witnessed her speculation. "Nothing's impossible," she finally murmured. "The question is, why bring that up?"

Her words slid like a knife inside him, deep. What did he say?

"Just keep that idea in mind, will ya? Strange as it sounds, I've had this children's story rolling around in my noggin for some time now."

"Really?" Her eyebrows aimed for the ceiling.

"Yep," he answered, because it was true. He'd been mulling over scenes and characters—even written down an outline of sorts.

"A wrangler who wants to write a children's book...I would never have thought it."

She smiled, her expression engaging alright. His heartbeat accelerated...