My Sexy Saturday ~ Her Insatiable Dark Heroes ~ "Wendra, I want you." 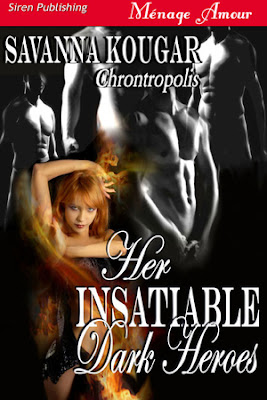 This week’s theme: Sexy and Strong ... the following is from a blog post I wrote when originally promo-ing HER INSATIABLE DARK HEROES. Talk about sexy and strong, these four heroes definitely qualify.

I don’t know about you, but me and my girlfriends would occasionally remark and tittering-speculate on certain attributes a man of steel might possess in the bedroom. Actually, we were darn tame compared to this day and sexual age.
However, I won’t go into the lusty lascivious details of our libation-encouraged fantasies, since this definitely gets into the realm of the personal. Suffice it to say, I’ve had my share of superhero fantasies. Now, I get the extreme pleasure of exploring the rod of steel.

My heroes in HER INSATIABLE DARK HEROES, have survived the catastrophic weather wars on their world. About ten percent of the remaining population begin to have superpowers in conjunction with the arrival of the Harbinger, a blue star seen through the ash and haze of their devastated planet-world. This particular story was much darker to write than my previous books because in this world, the characters are struggling to survive and to continue the slow recovery of their bay city, Chrontropolis."

“Do what you want.” Zotorro slid his hands beneath her, seizing the globes of her creamy voluptuous ass like a primitive. “I know what I want. Her butt filling my hands while I stroke inside her tight little hole.”

Zavier trained his gaze on Zotorro, as did Zent and Zion. A split second later, he asked what the three of them wanted to know. “You were with her?”

“You f—” Zion compressed his lips, looked down at her, then spoke. “All the way?”

Zotorro regarded them for the barest instant. “Once.” Blinking, he stared down at her kwim, his whole body tightening as hard as his cock. “Not like this.” He struck inside her swiftly, then paused, seemingly savoring the moment as if bliss itself wrapped around his rod. His entire face was a picture of rapture. “God, I want her. I’ve always wanted her. Wendra, I want you.”