Summer of Her Golden Wolf ~ A Flash-Scene Story 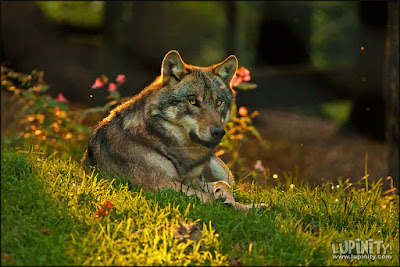 June 8, 2017
Summer-heat howls and yowls, shapeshifter lovers.
So, one of my latest mundane adventures... my ten year old fridge decided not to cool that well anymore. The freezer still works well, however. Given my current circumstances and the fact that I really have no one to assist me, I ordered a small inexpensive fridge thinking I could get that sucker inside the house easily enough... well first, UPS wouldn't deliver it half-a-mile up the gate because my drive was a bit overgrown... after wrangling with that situation on the phone, I ended up calling my neighbor to find out if there was any way he could help me out. Turns out he still had his pickup, and had no problem bringing the fridge over... okay, that finally worked out since UPS could deliver the fridge to him... now, said fridge is sitting at my back door waiting on me to rearrange things inside because I couldn't get it all done before delivery... well, the rearranging project has proven to be much bigger than I thought — but what isn't, right? I'm hoping things will go smoothly from this point forward *fingers crossed* ... I did discover a stash of raw honey, though, that I'd purchased to stock up several years ago ... honey never goes bad. It's a survival *good for your health* food.
Sighs... as far as my writing... lots of desire and good intentions. However, life has been cruel in that regard. The days fly by and I'm lucky to get enough done just to keep going, just hang in there... plus, the health problems aren't helping. Although, I might have figured out a couple of good remedies... seems so, anyway.
Yep, it is really painful not being able to write regularly... the ideas, everything is still there — waiting, I just can't get the time and enough energy. Or, I'm paddling upstream as fast as I can, it's just not fast enough.
~~~~~~ 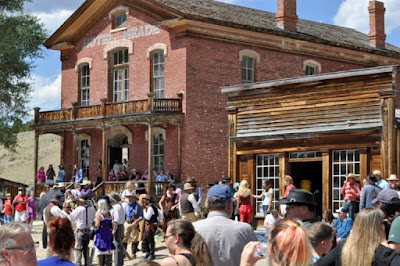 http://bannack.org/bannack-days
June 12, 2017
So, shapeshifter lovers, per usual I got interrupted in completing this post. Yep, I had to get everything arranged and cleaned – a big project – for my new small fridge – which thank you! Divine, is working well. But who knew you couldn't just plug it in... nope, there is a procedure, if you actually read the directions.
Anyway, I did manage to begin a flash-scene story set in my beloved Wolf Peak Territory. Or, I should say, the story begins in the 1830s gold mining town, now a ghost town – Bannack, Montana. If you're interested in this preserved ghost town, there's lots of fascinating info on the web...just do a search.
Note: I will attempt to regularly pen this flash story, 200 words at a time. But I just can't promise, given the unpredictability of my life.
Now, meet Kassy and Zorzun...

Summer of Her Golden Wolf
I"Where are the ghosts?" someone jokingly called out. Kassy laughed along with the rest of the group touring the Bannack, Montana ghost town. "Mining for gold, what else?" the guide shot back, then launched into her recitation of Bannack's gold rush history. Kassy trailed behind studying the old-timey tools inside the ore crushing mill. What had life been like, really? For moments eery whispers bombarded her head. As quickly, they stopped. What the...? Real ghosts? No, we live. The image of a young handsome man appeared holding an open bag of gold nuggets. Dumbstruck, Kassy murmured, "Gold fever never dies."
II Shapeshifter, Zorzun, used his wolf nose to sniff the summer wind gently sweeping through Bannack. He sought the bold half god who had telepathically contacted Dante, the alpha werewolf leader of Wolf Peak Territory. Claiming to possess vital intel, the rogue deity finally convinced the Peak's Circle of Witches of his beneficent intention. Zorzun had been chosen as Dante's 'trusted one' to meet with Pellegro. After all, he'd previously interacted with another god dynasty on Earth. Yet instead of Pellegro's power-potent essence, Zorzun caught whiffs of the most divine female scent. The woman was human. But her lineage was rare.