Summer of Her Golden Wolf ~ An Ongoing Flash-Scene Story 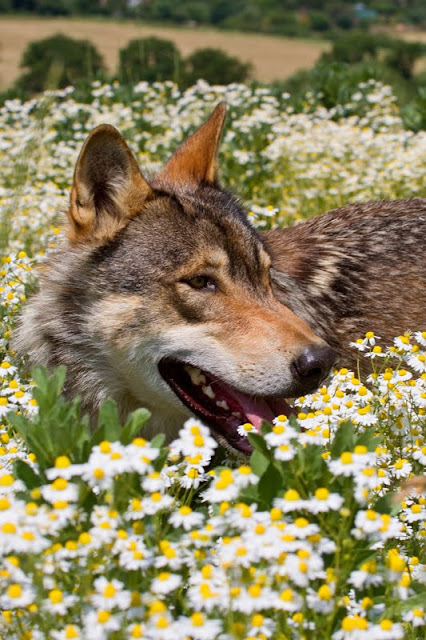 This Week In Wolf Peak Territory: Playing In the Wildflower Daisy Field ... The Cubs Are Hiding

The fireflies on the tame prairie have been absolutely magickal this year. Even during a rainshower they flew and flitted and flashed there colorful lights. The scene was surreal, a beautiful surreal that I can't quite describe. In fact, I never felt anything like it.

So, I managed another 200 words in my flash-scene story. Included is last week's beginning scene, then the next two flashes.

She drew him like a super-charged magnet. Zorzun forced himself to continue his casual stride toward Hendricks Mill, where the mined gold had been processed. Howl about fate's inopportune timing. Here he was on a mission, and mating excitement gnawed at him with vicious fangs. He hadn't even seen her. Not yet. Wait! Zorzun halted in his tracks, sniffing again. By the grace of Mother Shining Moon, the demigod's supernatural odor slapped his nostrils. More intriguing, the woman's scent mingled with Pellegro's. They stood together inside the ore mill. Howls, yes! Zorzun hurried his steps as fast as he dared.

No, I won't be participating. Not enough time, and I just can't get into FACEBOOK. It's like a big ole mental block. But, enjoy yourself with these wonderful authors.

Public
· Hosted by Romance Writers Behaving Badly and 9 others