Doctor? Who?... and... Damien Hancock's Mutant-landia 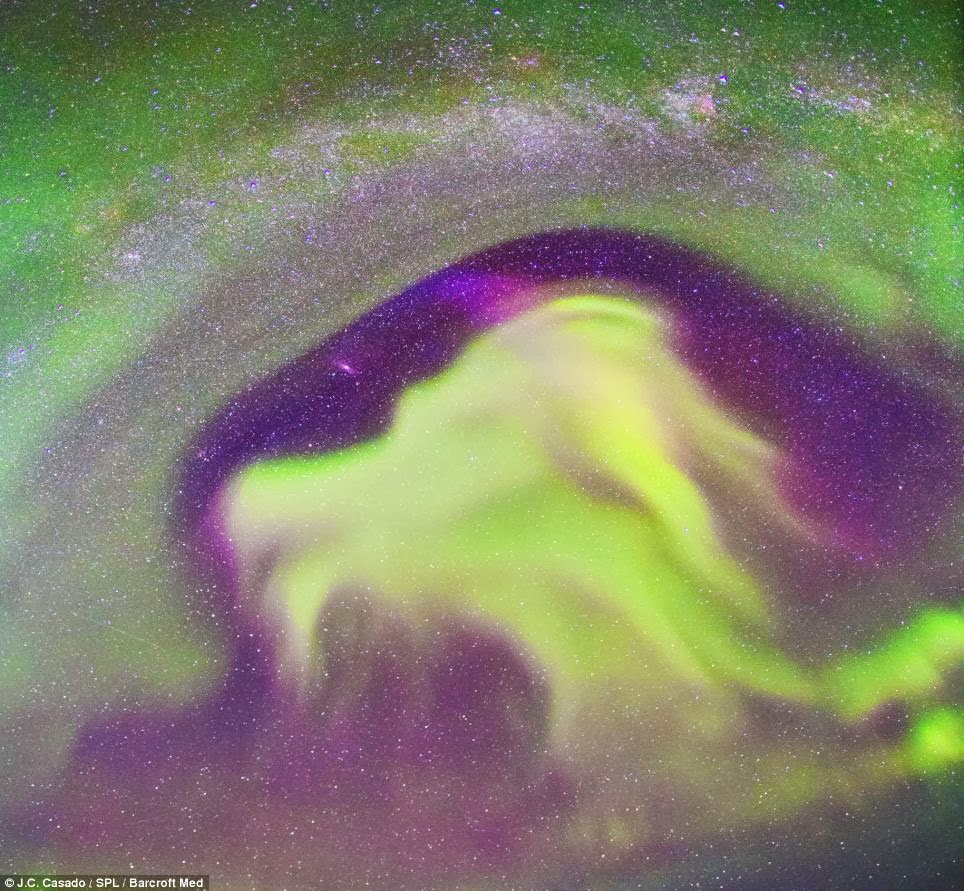 Lighting up the sky! Dragon's head appears from magical Northern Lights in the Arctic Circle
These long-exposure images were captured by astrophotographer Juan Carlos Casado, 55, who described them as 'mesmerising'.
'Auroras make you relaxed and you dream like you are a kid,' he said.
'The movements cause changing and beautiful forms within minutes, sometimes with intense colours, and if activity is high their size can completely fill the sky.
'There is a sense of great joy to observe directly something you've previously only known from photographs or documentaries.'
The images were captured in Greenland and Iceland by astrophotographer Juan Carlos Casado

Tuesday night mews, frisky fun KitKats... a really dreary overcast day on the tame prairie as the cold temps moved in... but, so far, no snow or other falling wet stuff... it's been a long, rough tough day for the Kougaress... yowls! ... and she's really worn out right now.

So, the Kougaress is looking at trying to do the Createspace print-book thing again for HER MIDNIGHT STARDUST COWBOYS. Currently her energy is so low, she can't think straight about it all, though. ~eyes crossed~

Anyhoo, she did her flash scene written for SHAPESHIFTER SEDUCTIONS. Check the snippet below.
~~~

Doctor? Who?
by Pat Cunningham

Dante’s enemies—and the guardian of Talbot’s Peak had quite a few—often wondered if the seemingly-omniscient wolf ever slept. For instance, he was still awake and dressed at three in the morning when the van pulled up to the bar. Ewan, naked as a jaybird and just as chatty, got out, with a human she in tow. He pounded on the bar’s locked door and demanded to see Dante. “Hate to bust in like this,” he said when finally ushered into Dante’s presence, “but we got a hunter out at the Rocky Top looking to blast all comers. Oh, this is Maureen. One of us kidnapped the other one. We’re still working out who’s who.”

“Are you the Doctor?” the woman asked.

The Mutant-landia of Damien Hancock
by Savanna Kougar

Now that Damien Hancock's secret 'doctor' is out of the closet but not out of his monster-cloning lab... well... read on.

The Mutant-landia of Damien Hancock

Damien Hancock, the werewolf pack leader who had first seized Talbot's Peak, growled orders to the four betas following in his wake. "Useless curs," he muttered, as they entered his hidden underground lab located near Pike's Peak.

An unnatural silence enveloped him once the ten-foot thick steel door closed, sealing them inside. His terror campaign to rid Talbot's Peak of humans and cat shapeshifters was yet to be fulfilled, to his everlasting rage.

But Damien was a werewolf man with a devious plan. Several diabolical plans to be scat exact.
~~~~~~