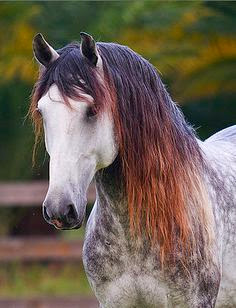 Yes, the Kougaress absolutely loves horses, and this gray Lusitano stallion is a beauty!

Late night mews, Summer-prowling Big Cats... a bit milder temps on the tame prairie today... and it looks like storms are headed this way... some advice that might be useful... if you have one of those Himalayan salt lamps, and if there's high heat and humidity, it will 'sweat' and cover the area beneath it with salt... so the Kougaress had to deal with that mess... it's always something, isn't it?

So, darling kittens, duck and cover from the superstorms of life. And, always remember this Big Cat loves ya!
~~~~~~

Yep yowls, rolling along on the polishing of her latest manuscript... the Kougar, writing under the pen name, Stevie Klark, just wishes it would all happen much faster... but life stuff always intervenes.

As horse, Grant Thunderhead galloped over the magnificent harsh terrain of the Four Corners. His territory, as he thought of it, having lived on his small ranch spread for nine years now.
This land of majestic rock sculptures, or hoodoos, held ancient secrets. Grant sensed them beneath his flying hooves. Over the years, he'd gradually explored, looking for those secrets, and found an unbelievable, fantastical cache of steam-powered machines.
~~~~~~