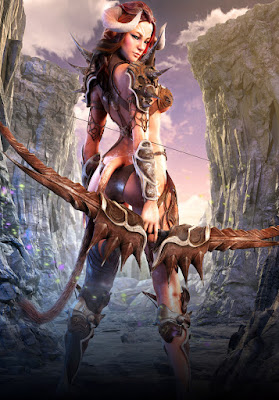 She would make a wonderful, kick-butt heroine!
Evening yowls, Summer-strolling Big Cat Beauties... so, looks like there are more rainstorms on the way... the Kougaress has battened down the hatches as best as she could... and wow, she's worn herself out getting everything done today, and getting the bloggie done, as well... and talk about jungly green everywhere on the tame prairie... plus, the little creek at the end of the drive is almost overflowing its banks, given all the recent rains.

Stay safe and dry, darling kittens, and prepare. The superstorms of life are here. Just remember, this Big Cat loves ya!
~~~~~`

Yep, the Kougar will try to remember to sign up for the linky blog hop MY SEXY SATURDAY at  ~mysexysaturday.blogspot.com~ and will be posting at TITLE MAGIC ~titlemagic.blogspot.com ~

AND...  All Romance® eBooks releases a shiny, new site for mobile phones and tablets!
AllRomance.com, the largest online bookstore specializing in the sale of digital romance, has launched a new, responsive platform that will give our 480,000+ registered readers with smart-phones and tablets the opportunity to browse, buy, download, review, rate, and gift all the romance they need from all the publishers they love--24 hours a day/7 days a week. We hope you will try the new site using any mobile device or tablet. We'll be promoting the launch and encourage you to promote the books you have on our site over the next few days using the hashtag #AReMobile.

Please visit www.allromance.com/mobile to view and bookmark the new, mobile site.
For your convenience, we've created an introductory post with navigation tips.
~~~~~~

SMUDGING IS GOOD FOR YOU 'NEWS' ~

Studies Reveal "Smudging" Eliminates Dangerous Bacteria in the Air
Natural Blaze - Smudging - or the ceremonial and ritual burning of medicinal and fragrant herbs and resins of specific plants for spiritual cleansing, is an ancient practice that has been honored and carried out the world over in cultures spanning the centuries. It is also one that is finding a great surge of added popularity in many non-indigenous cultures and circles in the modern world. The basic concept is that by burning particular plants parts and resins, the energetic blueprint or spirit/intelligence of that plant is released, producing a medicinal smoke. The smoke is then utilized to cleanse the energy of individuals, groups, spaces or object. Herbs like Sage, Palo Santo, Copal, and Sweet-grass are common smudging herbs that are widely used for healing and to remove unwanted energetic and spiritual buildup and also to instill blessings.
~~~~~~

Chinese Sword Found in Georgia Suggests Pre-Columbian Chinese Travel to North America? n July 2014, an avocational surface collector chanced across a partially exposed Chinese votive sword behind roots in an eroded bank of a small stream in Georgia. The 30-centimeter-long (foot-long) artifact is possibly a one-of-a kind find in North America and is another example in the growing list of seemingly out-of-place Chinese artifacts suggesting Chinese travel to North America in Pre-Columbian times.
The exquisite sword has preliminarily been identified as being fashioned in Lizardite and has surface features indicating it is very old. It is hoped that future testing will confirm the type of stone, and determine the source, since Lizardite deposits exist in both eastern and western hemispheres.
~theepochtimes.com/n3/1417781-chinese-sword-found-in-georgia-suggests-pre-columbian-chinese-travel-to-north-america~

Did China discover AMERICA? Ancient Chinese script carved into rocks may prove Asians lived in New World 3,300 years ago: SQ NOTE -THE EGYPTIANS WERE HERE BEFORE THE CHINESE! The discovery of the Americas has for centuries been credited to the Italian explorer Christopher Columbus, but ancient markings carved into rocks around the US could require history to be rewritten.
Researchers have discovered ancient scripts that suggest Chinese explorers may have discovered America long before Europeans arrived there.
They have found pictograms etched into the rocks around the country that appear to belong of an ancient Chinese script.
~dailymail.co.uk/sciencetech/article-3152556/Did-China-discover-AMERICA-Ancient-Chinese-script-carved-rocks-prove-Asians-lived-New-World-3-300-years-ago.html~
~~~~~~

Quantum Computing is Now Real: Super Smart Machines Just Ahead
Tuesday, July 7, 2015
Quantum computing's elusive promise has always been computing power that approaches the infinite, and machines that are not just as intelligent as human beings, but far smarter. But building a computer that takes advantage of quantum indeterminacy has been difficult--until now.
~unknowncountry.com~
~~~~~~