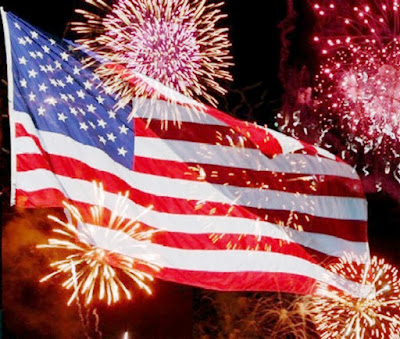 Evening yowls, Summer-rambunctious Kittens... nice and cool and temporarily dry on the tame prairie... but the other night when the storms hit, a tornado touched down, and did some damage, about thirty miles away... and it was kind of hairy for a time... the Kougaress got her potted plants in to save them.

HAPPY FOURTH, most darling kittens. Create some good fireworks with someone you love. And remember, this Big Cat loves ya!
~~~~~~

Also, given Amazon's new anti-author policies, the Kougar may pull her Indie books... she hasn't decided yet... however, she probably won't upload another book unless Amazon changes their policy in favor of authors actually making a fair amount.
~~~

“Are you still not speaking to me, Fair one?”

Greely scrunched her face and tucked herself lower in the claws that kept her safe on the long journey home from England.  She was pissed at her dragon lover and didn’t even feel like smiling as he spoke to her from his scaly snout.

“You know I had no choice…”

ONE HELLUVA UFO SIGHTING... AND IT'S SINISTER 'NEWS' ~

MYSTERIOUS UFO “CUBE” APPEARS OUT OF A BLACK MASS “PORTAL” IN THE CLOUDS ABOVE EL PASO TX….WHAT IS THIS??? … AND ARE THERE MORE WITNESSES?
Recently a video was released online by the UFO Reseach YouTube Channel named “Secure Team “. The Video was sent into their channel by a man name Walter out of El Paso Texas and they immediately released on their YouTube Channel, To their surprise it immediatly went viral, getting over 60,000 views in just 1 day, and now has over 120,000 views in the last few days. with Secure Team Reps stating that most feedback was Positive in nature and they found that many other had also see this mysterious cube in the skies over El Paso.
https://paranormalconnectionsradioshow.wordpress.com/2015/07/03/mysterious-ufo-cube-appears-out-of-a-black-mass-portal-in-the-clouds-above-el-paso-tx-what-is-this-and-are-there-more-witnesses
~~~~~~

Mystery ‘beast’ spotted roaming UK
London Telegraph
July 3, 2015
A mystery animal has been spotted prowling in the garden of a house on the outskirts of Plymouth.
Office worker Carole Desforges saw the animal from her living room and managed to get a few snaps of it through the window before it ran off.
Carole, 59, first thought it was just a fox – but having reviewed her pictures she is now not so sure.
Some friends have suggested it could be a puma, lynx, leopard – or an unknown beast of Plymouth.
~~~~~~