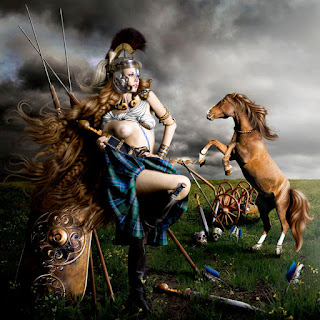 Can you believe it? Spring is about 20 days away, and St. Pat's day is coming up fast. This year is even more superspeed than last year. Although, I've experienced some odd sensations of being sort of out of the time loop. That's the best way I can express it, anyway.

So, here's another revised chapter from WAITING FOR A FILLY GIRL. No, the editing is not going fast enough, of course. ~sighs~

Drev forced himself to breathe. Who was she?

This woman who was about to walk into his sex fantasies?

For damn certain he'd never laid eyes on her before. Not in Wolf Peak Territory, or anywhere else for that matter.

A faint shimmer behind the woman's back caught his eye. Drev attempted to analyze what the cause could be, but the refined beauty of her features captured his gaze again.

What the hell? Concern seized him. He frowned.

Why wasn't she wearing a coat, a proper hat? Montana was ass-beating cold this time of year.

A split second later Drev made his decision. He jerked the door open. Given he kept the hinges well oiled so he could come and go silently, there wasn't a squeak of sound.

In one motion, he grabbed hold of the woman's elbow, and hauled her inside while shutting the door.