WolfPeak~About to lift off for a short flight... 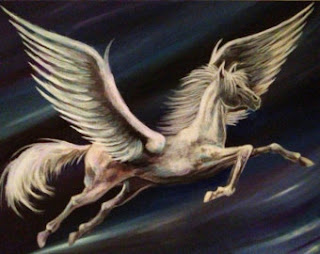 Omygoodness, what a day, yesterday...for a reason I won't get into here, I went on a nearly two hour hike through the back pastures on my tame prairie...given there are wooded areas, you could say I also went 'forest bathing', the new in-phrase for going on a hike. So yeah, despite my health issues, I've improved enough to manage that trek... and then managed to carry the old, refurbished XP computer I purchased—which I wasn't expecting to be delivered yet—half a mile to the house... now, that was tough going.  But, at least, it appears to work, even though, there's a bent area on the back... and I just ordered a WordPerfect 12 cd... so hopefully that will install, and work for all of my files... what a mess.

Anyway, on my impromptu hike a skunk wandered by... looked like a female and she had her tail up the whole time... I couldn't believe she'd come that close, about fifteen feet away... but I decided to stand totally still, all the while hoping she wouldn't spray... yeah, I am sprayless... thank goodness for that!

So, the computer saga continues, ugh!... but maybe I'll get a working system close to what I had or still have, except the monitor suddenly goes black—it's not the monitor, either because I checked that—anyway, the computer doesn't shutdown totally, and you have to unplug, and reset the time clock... the problem could be fixable, except I'm not in a situation to take it in for repair.

Alrighty, I'm about to revise/edit Chapter Fifty-eight of WAITING FOR A FILLY GIRL... here's a snippet where Keina is about to be abducted by the villainous Prince Tretorff.

Chapter Forty-seven: She Neighed a Scream

Flubergastov, Keina mentally frowned. As a descendant of battle mares I should be tougher. I should be ready at a moment's notice to fly and fight.

Several days after helping to defeat the drone armada, she still recovered. Epona, a training regimen was definitely in order.

Upon their return to the cabin, Drev had pampered her, making certain she rested, and ate good meals.

Having morphed already, Keina stretched her wings with care. The cold brisk wind ruffled her feathers as she flapped, testing her strength.

About to lift off for a short flight over the surrounding forest, Keina heard an all too familiar whoosh-crackle. A gateway from her realm opened behind her.

She whirled around, her psi-senses shrieking. As if a thrown rope choked her, panic seized Keina. She neighed a scream.

Posted by Savanna Kougar at 1:11 AM