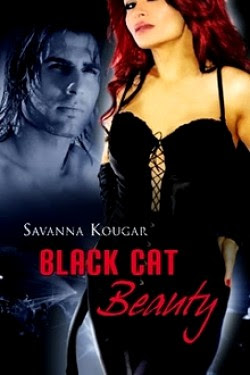 Here are the first seven paragraphs~


Chapter One:
Magickal Seduction By a Black Cat

"Bored." Sable tossed back her auburn waves of thigh-length hair, then sauntered inside the main ballroom of the privately owned gothic mansion.

"Flat." She wrinkled her nose and wished she could flip her own tail, instead of being stuck with the fake, listless cat tail of her costume. With casual flair, she set the champagne glass on the first passing tray, waiter attached, and kept on gliding into the main party area of the monstrous mansion.

Remembering not to pivot her ears in search of Yisbet's high-pitched signal, a keening sound beyond human hearing, Sable surveyed the Halloween crowd of black cats, and decided Halle Berry's version of Catwoman won out as the most favored costume—with the Eartha Kitt costumes coming in a close second. If it hadn't been for the fact that most of those present were humans encased in their second-skin black cat costumes, Sable would have felt right at home.