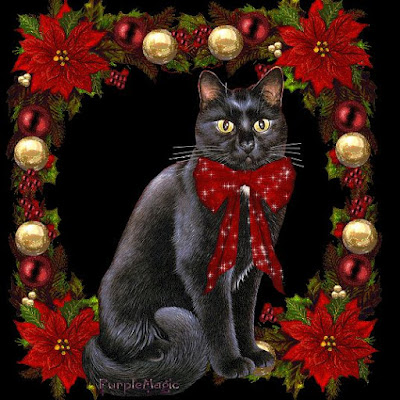 Here are some scenes from the Black Cat Christmas party this year in Moonrise Lake, Montana. 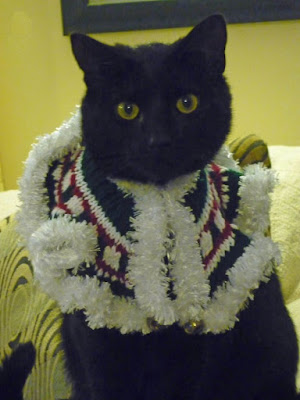 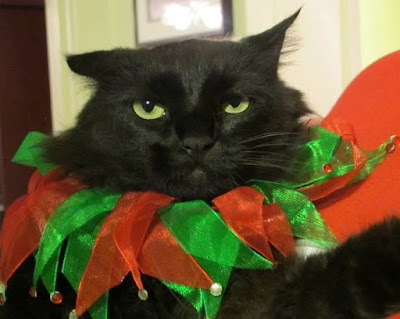 Not a happy party camper. However, th creamy egg nog perked him up later. 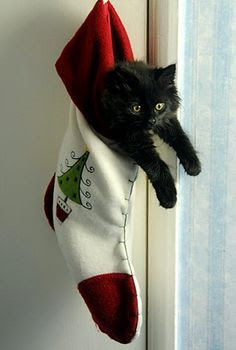 Hanging your black kitten stocking with care...she needed a nap. 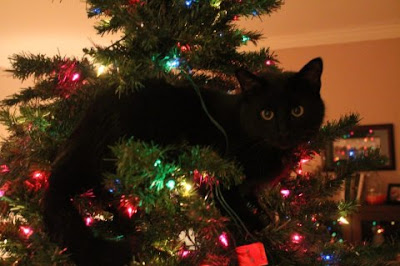 Comfy Christmas Tree perch, a must have at a cat holiday gathering. 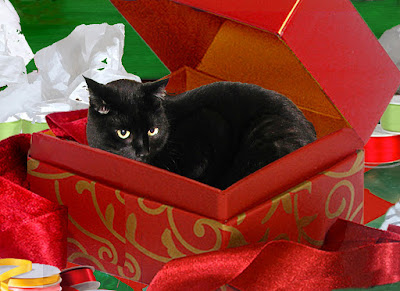 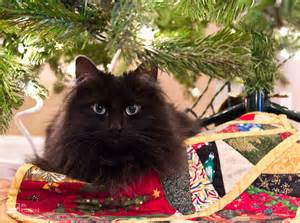 And a good time was had by all. 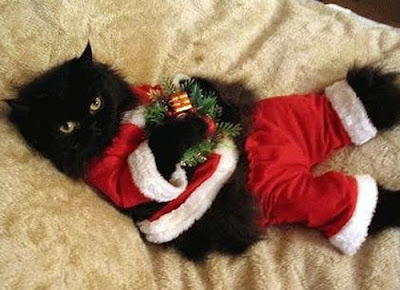 Mom, was this really necessary?

Sable disrobed, tossing her elf costume into an untidy pile. She posed with one hand on her bare hip, taking a few moments to admire her human body in the dressing room’s panel of mirrors. A black cat girl could still be all sexy cattitude even as a woman. Reaching for her sumptuous, figure-hugging gown, she shimmied into it.

Despite Devon’s interest in dressing her as pleased him, she’d secretly had the evening gown created. With time being short, Sable studied the drape of deep wine-colored velvet and satin. She made adjustments quickly, then moved to the vanity and made up her face like a torch singer.

Finished, she peeked around the off-stage curtain to make certain the last child had left Devon’s lap and the event was officially over. They’d attended a charity party, at the dinner theater, for older unadopted kids. Devon had played Santa Claus, only as his Super Ace persona. There’d been more dancing to his band’s music, than actual ho-ho, traditional make-a-wish, lap sitting by the pre-teenagers.

In league with Devon’s band to give him this Christmas surprise, Sable moved from behind the curtain. Strutting like Mae West, she walked toward the center of the stage as they strummed the opening strains of ‘That old black magic’.

“Devon, dude, your woman has a special gift for you,” Rick announced.

Sable seductively leaned her hip against the piano. A wide smile naturally formed on her face as Devon spun around. His impassioned gaze threatened to blister her skin, and was definitely a promise for later lusting pleasures.

Tossing her long waves of auburn hair that she’d intentionally mussed, Sable sang, “That old black magic has me in its spell. That old black magic that you weave so well.” Sauntering forward with the music, she crooned, “Icy fingers up and down my spine...the same old witchcraft when your eyes meet mine.”

Their gazes locked, and their mutual desire sparked between them. Devon started toward her, only halted by his manager’s hand on his arm. If he could have super-speed swept her up, and carried her away, he would have.

Languidly hitching her hips for a few strides, Sable halted. “The same old tingle that I feel inside.” Posing, she slanted her gaze over her shoulder. “When that elevator starts its ride...down and down I go, round and round I go.”

She watched Devon force himself to sit down at one of the small tables near the stage. His hot gaze roamed over her body and he did nothing to hide the swell of his cock.

Pivoting, Sable swayed ever closer to him. “Like a leaf that's caught in the tide...I should stay away but what can I do...I hear your name, and I'm aflame...Aflame with such a burning desire...That only your kiss can put out the fire...and your meaty sausage, she added mentally.

Spreading her hand on the voluptuous curve of her hip, she taunted him by stopping and bracing her legs.  “You are the lover that I've waited for...The mate that fate had me created for...And every time your lips meet mine...” Sable bent forward pursing her lips. “Baby down and down I go, all around I go.” Leaning a bit more, she lazily shook her shoulders showing off her cleavage.

Devon mentally glued himself to the seat of the chair. Sable saw it in his eyes. Yet, the hunger in his gaze ravished her without compromise. Sable shivered inside, scorched by the carnal heat only he could generate within her.

“Sable,” he paused for an instant, “come here.”

Ignoring his hoarsely spoken command, she whirled and raised her arms in a sensual imitation of flame. With her back to him, she waited for the band to begin  her next song.

“Devon, keep your seat,” Rick encouraged. “Your woman has one more gift for you. I guarantee you’re going to flip your dick over this one.”

With the sound of the sultry Christmas music, Sable lowered her arms. Turning toward Devon, she stroked her palm over one cocked hip. “Santa baby, slip your Sable under your big tall tree...I’ve been an awful good girl...Santa baby, so hurry down my chimney tonight.”

Devon froze, now stuck to his chair. His sausage had definitely grown meatier in size and his piercing gaze followed her as if he might lose sight of her.

Sable moved closer, exaggerating her slow strut. “Santa baby, drive me like your convertible too...I want you to...I'll wait up for you, handsome...Santa baby, so hurry down my chimney tonight.”

His dark gaze sliding to her hips, Devon patted his thigh, an invitation to sit on his lap.

Feeling the low purr in her throat, Sable continued the song. “Think of all the fun I've missed...Think of all the men that I haven't kissed...Next year I could be just as good...If you'll just fulfill my Christmas list.”

Devon crooked his finger, beckoning her to come closer still.

Sable slowed, rotating her hips like an old-fashioned stripper. “Santa baby, I want your yacht.” Aiming her gaze at his cock, she sassily crooned, “And really that is a lot...Been a naughty girl in bed all year...Santa baby, so hurry down my chimney tonight.” Slinking nearer, Sable sang in a smooth purr, “Santa honey, there's one thing I really do need...Your seed...Deep inside my flooded pussy...Santa handsome, so hurry down my chimney tonight.”

Devon shot upright, but didn’t approach her. Though, his hunk o’ meat looked as though it tried to approach her, given its thrusting size.

“Santa sexy, and fill my stocking with your sausage.” Sable swayed her shoulders provocatively, along with the sweltering music. “Give me your meatballs...For an extra good time...Santa sexy, and hurry down my chimney tonight.” As she inched toward Devon, Sable rippled the long fall of her hair, knowing how it affected him. “Come and trim my Christmas wreathe...With some decorations bought at Tiffany's...I really do believe in you...Let's see how much you believe in me.”

Devon’s eyes glowed, super-powered with an inner light, an indication to Sable that she’d savagely aroused him. Just the way she liked it, depending on her sexual mood, of maow-ing course.

Raising on tiptoe, Sable twisted like the cat girl she was. Placing her lips close to his ear, she rumbled her best Eartha Kitt purr.

Before she could think or blink, Devon seized her, dipping her so low, Sable’s feet barely remained on the floor. Immediately, his kiss trapped her mouth with delicious ruthlessness. For long incredible moments, the unceasing press of his mouth thrilled through her limbs, and left her boneless inside his super strong hold. The molding of his lips over hers tempted Sable’s fiercest desires, until ultimately, she raged for whatever he wanted to do to her.

“Sable,” he growled privately. “You’re getting a ring whether you like it or not.”

“Meow, super man,” she breathy whispered against his mouth. “Put it around that meaty cock of yours.”