The Kougaress pouncing on injustice... 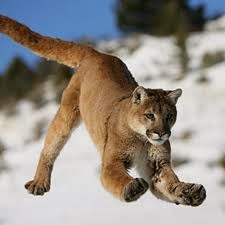 just like her heroines and heroes do in their love stories.

A new genre in town: Justice Fiction ... see below.

Watch your tails, darling kittens. 'Cause this Big Cat loves ya!
~~~~~~

YES! The Kougar e-sent her *flash fiction* post for romance author, Karen Nutt's Halloween Flash Fiction Bash at ~kmnbooks.blogspot.com~. The spooktacular fun begins on October 1, with a new author featured each day during the entire month of October. The Kougar is scheduled for October 6, and yes, she needs to get the PROMO put up... her only excuse is being manically busy.
~~~

Breaking Up is Hard to Doby Pat Cunningham

Bethany clung to her boyfriend Jordan and didn’t even try to fight the tears. Maybe if she held him tight enough she could keep her heart from shattering. “You can’t leave!” she wailed. “You just can’t. School’s starting.”
Jordan patted her awkwardly. “Don’t cry,” he pleaded. “Geez, Beth. I told you this would happen when we started dating. My family always heads south this time of year. We’ll be back in March, I promise.”
~~~

A new genre in town: Justice Fiction ... the Kougaress learned something new about the fiction book market when listening to the following show on COAST TO COAST AM. In all honesty, at this point in time, she doesn't pay much attention to other fiction genres other than what she writes in... and she could care less about NY or Amazon bestseller lists. For the sake of time, the Kougaress won't go into *why* that is.

JUSTICE FICTION, according to William B. Scott are books that seek *justice* for a real tragedy experienced by the author, who then writes a story addressing the injustice done with creative solutions. This happens because the author can no longer get any justice through the system. [who can, right?]

This genre is beautifully intriguing for a number of very good reasons, especially in these times. Not to mention, this 'justice fiction' parallels what the Kougaress has done when writing her books. She always incorporates that basic theme -- or 'justice must be done' and IS done 'creatively' in her stories.

Yes, from the time of her birth, this Big Cat has always had an intrinsic sense of what is just and what is not. She's fought for justice for others and for herself. At times, she's triumphed. And at other time, she's been severely brutalized by the system. She's watched others she cared about severely brutalized as well. And the world today... well... justice has been left in the dust and stomped down into the dirt by moronic jackboots.

On a further note, the Kougaress well remembers when the news story broke that a man who had been 'legally' carrying his gun was shot to death at a Costco in Las Vegas. The details were few and far between, and no one appeared to be 'talking' at that time... other than a few witnesses who stated the man had NOT acted provocatively in any way. So, yeah, it was an OBVIOUS COVERUP from the start.

Well, it was Mr. William B. Scott's son who was murdered that day. His book, THE PERMIT, is 'justice fiction'. And it sounds like one helluva good story.

Joining John B. Wells, former NSA officer and author William B. Scott discussed his book, "The Permit", a work of fiction based on the real murder of his son by police and its subsequent coverup. Scott revealed the epidemic of police brutality against civilians and how the system protects the bad guys in official positions.

Video(s):
Into the Wild: Animal Trafficking in Costa Rica
Selling the Girl Next Door