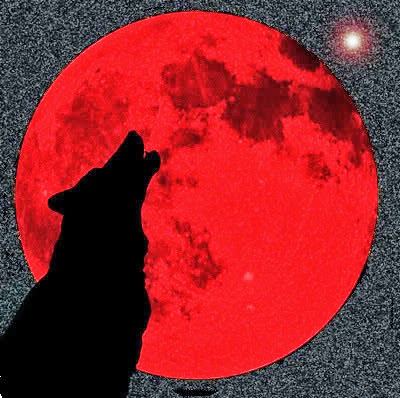 at SHAPESHIFTER SEDUCTIONS ~
Pic from ~mysticinvestigations.com~

Full Moon, Blood Moon mews, most gorgeous Kitkats... from a humid eighty degrees the day before, to a rain teaser yesterday, then a period of pounding rain, to below freezing temps this morning, and some little patches of snow... a couple of days ago the Kougaress caught sight of a wild turkey, a hen who was running in the pasture next door... she hadn't seen any of the wild turkeys for quite awhile... and a couple of hours ago the full moon hung not far above the eastern horizon and was the most beautiful shade of golden orange... just now one edge of the moon is already eclipsed.

So, my lovely darling kittens, watch out for your own tail, and take care of your loved ones, it's rough, rough, world right now. Remember, this Big Cat loves ya!
~~~~~~

A FULL MOON FAIRY TALE CONTINUED
by Solara Gordon
Kent leaned into the darkness surrounding Satin. He dipped his head lower, sniffing as he did.  Her fiery spicy scent swarmed over him.   He swallowed trying to look past the pulse just below her ear.  He felt and saw her reaction to him.  Every rhythmic beat and slosh of her heart and blood told him how she felt.  Even her gossamer wings twinkled as he whispered what he wanted to do.

Smash and Grab
by Pat Cunningham

Maureen backed up against the van. Her eyes darted past Atcheson’s sneering face toward the bar and the parking lot and any chance of help. Her hopes soared at sight of the cop car, only to plummet when Barry and Lowenstein climbed out of it. A delivery truck rumbled into the parking lot. Odds of the driver coming to her aid wavered at 50-50. One other car sat at the far end of the lot, but its driver appeared slumped behind the wheel. Some late-night partier, sleeping off his binge. He’d be useless even if he did come to in time.
~~~~~~

Demons, Djinn and UFOs
Nick Redfern looks at clandestine government interest in a connection between the infamous Djinn and the UFO phenomenon. — Mysterious Universe
~~~~~~

Pentagon Secret Plane Has Been In Space For Almost 500 Days - And They Still Won't Say What It's Doing There...
Thursday, April 10, 2014
See video The X-37B, the U.S. Air Force's secret robotic space plane, has now been in orbit for almost 500 days, a record-breaking time period for space endurance. The latest version of the relatively tiny spacecraft, which is just one quarter of the size of the space shuttles, was launched in December 2012 on a top-secret mission.
~~~~~~