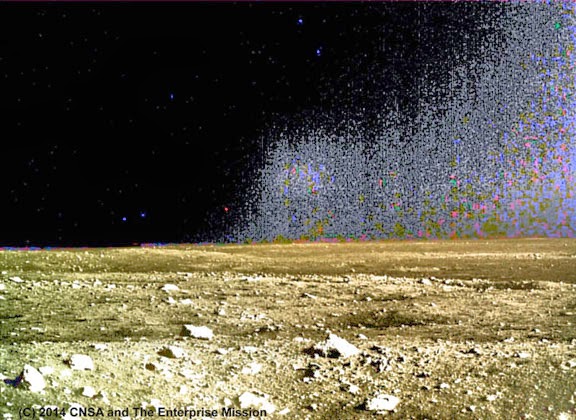 at SHAPESHIFTER SEDUCTIONS ~
The Moon's Magnificent Past
Pic from Coast to Coast am ~coasttocoastam.com/pages/chinese-lunar-images~

"Equalized version" of another official Chang'e-3 lunar surface image, revealing another set of the Moon's startling "glittering glass towers" standing only a few miles northeast of the the Chang'e-3 landing site. Careful examination of the image will reveal an amazingly coherent geometry to these ancient, heavily meteor-eroded glass structures ... including, the surface placement of the still-glowing "colored blue and red panels" appearing at these structures' base and to the extreme right -- apparently energized colored panels "embedded in the ancient glass." Click on image to enlarge. Link to additional images; view paper at Enterprise Mission.
~~~~~~

Morning mews, excellent and most fantastic Felines... a stormy rainy morning on the tame prairie... the rain is always good at this point, since last year was too dry overall... yesterday, the Kougaress saw her family of eagles circling over the field... always a wondrous sight... and she also caught sight of a turkey hen... who likely has eggs or a brood of babies by how she acted... there are some blossoms on the old apple trees so hopefully there will be apples in the fall.

Happy Wednesday, everyone! My muse has been a busy bee, but she's not wanting to work on what I want to work on. On the other hand, I do need to try and finish Witch's Moon, so I guess it's not a bad thing that she wants to work on that story! Today's offering is the first little bit of chapter 2. I hope you like it.

The Moon's Magnificent Past

Former NASA consultant and science adviser to CBS News and Walter Cronkite, Richard C. Hoagland ~enterprisemission.com~ revealed "history-changing" results of the recent four-month-old Chinese Chang'e-3 unmanned landing on the Moon. He presented --with startling Chinese government lunar images–[coasttocoastam.com/pages/chinese-lunar-images]  "what the Chinese have really discovered on the Moon." Using photo-processing with the official Chinese photos, he "equalized" (turned up the grain) darker areas, which then showed evidence for the ruins of "tall, glass crystalline skyscrapers" that may be miles high.

The Chang'e-3 images, which first appeared on the official Chinese Army website, are part of a plan to challenge the West (which has been protecting secrets about the moon), and "blow the doors off," he asserted. When you compare the Chinese imagery of these "ancient crystalline domes" with the Apollo images, including Ken Johnston's print, "the geometry is identical," he stated. "The whole moon appears to have been kind of remodeled on the surface," and the extent of these ruins goes on for hundreds of miles, Hoagland continued. For more on this lunar landing imagery, see the Enterprise Mission's new paper. [enterprisemission.com/china/Chinese Lunar Landing.htm]

Hoagland believes that a Type II ancient civilization left stunning architecture, not just on the moon, but all over the solar system. "We're looking at the cathedralization of the solar system by an extraordinarily advanced race" that we may be distantly related to, he remarked. In addition, he updated several science stories, including the state of current private space explorations, exoplanets, Mars, and Europa.
~~~~~~

A 19th-century shipwreck near the Golden Gate Bridge was just discovered
A century after a passenger steamer sank in the San Francisco Bay, killing more than a dozen people, the shipwreck’s remains have been located. Again. — Washington Post
~~~~~~

Amazingly Vivid Dino Illustrations Reveal a Brutal Prehistoric World
A new book illustrates the dinosaurs -- and many of the beasts of millennia ago -- in beautiful, spectacular and vicious style. — Wired
~~~~~~