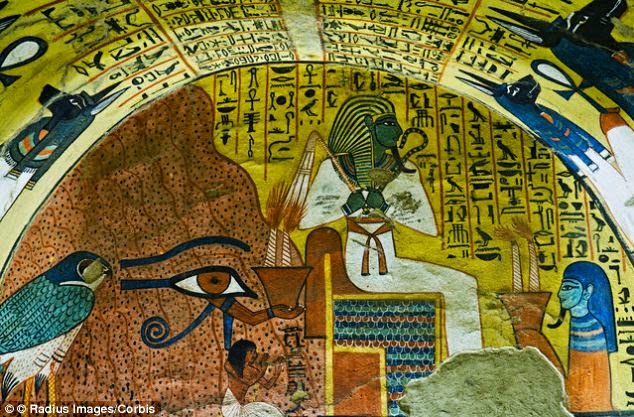 Gateway to the afterlife? The underground structure is situated in the middle of what was a processional route joining the Nile with the Osireion - the temple dedicated to Osiris - which is one of the greatest findings of Oxyrhynchus. The god is pictured in this painting in theTomb of Pashedu in Luxor, Egypt alongside - Orus, the hawk god protector of Osiris
~dailymail.co.uk/sciencetech/article-2616055/Egypt-dig-unearths-early-image-Jesus-mysterious-underground-tomb.html~
~~~~~~

Ancient Egypt was far more than what has been offered in most history books. Far, far more, in fact. To most it would look like a far away realm of the imagination rather than any identifiable reality. In one of my WIPs I've touched on this reality. Yet it will look fantastical, mythical. Ah, to have time to finish White Fang and Z'Pasha's love story.
~~~~~~


Late night mews, magical May Kittens... another rather odd weather day on the tame prairie... cool with gray clouds taking over several times, but no actual rain... it just looked that way... the sun popped out during the late afternoon... anyhoo, head-spinning busy today... and the Spring allergens are definitely here... but the Kougaress saw a lovely patch of wild violets in her yard.

Plant those gardens if you can, but hunker bunker down, darling kittens, more life superstorms likely on the way. Remember, this Big Cat loves ya!
~~~~~~