White Fang and Pasha ~ Take me to your loins... 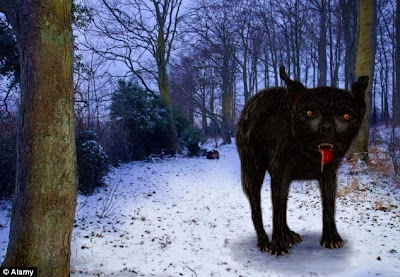 Is it him? The bones are believed to date back to the 16th century, when the legendary hell hound Black Shuck (pictured in an artist's impression) was rumoured to roam East Anglia. They show the dog was a 'large male' ~dailymail.co.uk/news/article-2629353/Is-skeleton-legendary-devil-dog-Black-Shuck-terrorised-16th-century-East-Anglia.html
~~~~~~

Morning mews, beautiful and bold KitKats... a summery warm day on the tame prairie... although it looks like thunderstorms could move in this evening ... so, the Kougaress has been cutting down patches of poison ivy in her jungly yard... yeah, goats are supposed to like and eat poison ivy... and this Big Cat wishes she was up to having a couple of those critters... but healthwise and timewise, it ain't happening.

Lots of chaos in this wacky crazy world, so take care and prepare, darling kittens. 'Cause this Big Cat loves ya!
~~~~~~

THANKS! To everyone who has purchased the Kougar's books. She's sending you good, good sparkly vibes.
~~~

The Kougar briefly scanned a news update from SMASHWORDS and it appears as though they are still moving and shaking the Indie book world, and helping authors in key ways.
~~~

Take me to your loins...
by Savanna Kougar
Late afternoon howls and yowls, shapeshifter lovers.

A couple of weeks ago my hero, White Fang, a super wolf, and his heroine, Pasha, an Egyptian cat goddess, provided a nice surprise, the beginnings of a love scene. Link: "Mating dance or battle of the sexes?"
This week, Pasha gifted me with her side of their impassioned encounter.
Their story is yet to be fully written, and is titled, WHITE FANG, ACE WOLF REPORTER.
The following is unedited... but I hope you enjoy.

Take me to your loins...

The inferno force of the universe spun through Pasha as she feverishly kissed White Fang, and gently caressed his back with her human claws. She'd known once their hungry passion for each other was loosed, it would burn her. No, firestorm through her soul as if she rose in the ashes of the phoenix -- a ritual she performed every seven years.
Her cat yowled savoring the extreme pleasure as White Fang straightened and drank in the sight of her.
~~~~~~

Mysterious 'Fairy Circles' Not Explained by Termites, Study Suggests
"Fairy circles" that form in the arid grasslands of Namibia have baffled scientists for decades.
— LiveScience
~~~~~~

Tuesday, May 20, 2014
UFOs Crash In China; Villagers Shocked By 'Huge Ball Of Fire'
Residents of villages in the Heilongjiang province of China reported three UFOs fell from the sky on Friday morning, according to the China News Service. — Huffington Post
~~~~~~

Baby mammoth goes on display in UK
A perfectly preserved baby mammoth which died 42,000 years ago has been unveiled at the Natural History Museum in London. — BBC News
~~~~~~