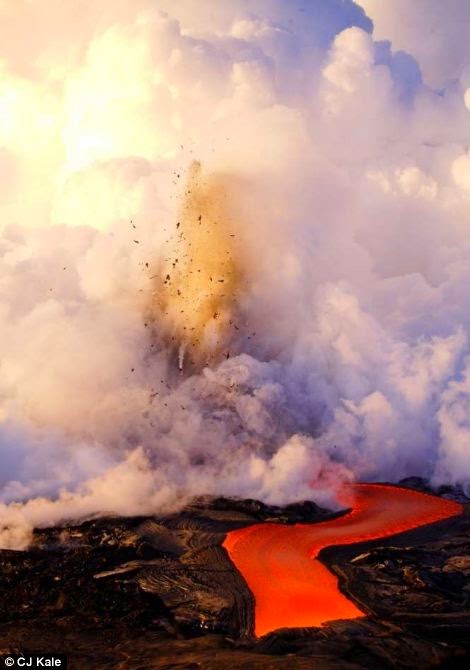 at SHAPESHIFTER SEDUCTIONS ~
These pics are definitely awe-inspiring and author-inspiring.

Headline-snippet: The waves that are on FIRE: Photographers risk their lives to capture amazing images of lava flowing into Hawaii's ocean surf CJ Kale and Nick Selway are the first to capture the lava flow from the Kilauea Volcano in Hawaii from the sea
They had to enter the water within feet of where the lava was running into the surf, braving the scalding water and dodging ‘lava bombs’ floating towards them - and have got injured for their art in the past
They said that the sand felt like glass, the water scalding and they often had to retreat to colder water
Duo had to wait five years for the right conditions to photograph the eruption - and don't use Photoshop ~dailymail.co.uk/sciencetech/article-2622201/The-waves-FIRE-Photographers-risk-lives-capture-amazing-images-lava-flowing-Hawaiis-ocean-surf.html
~~~~~~

Morning mews, scampering and playful Big Cats... looks like the storms are coming in today... so far, just grayish skies and heavy moist air on the tame prairie... the Kougaress got more yardwork done and pruned her rose bush, which took a beating with the frigid temps but is growing nicely... this Big Cat so enjoys being outside during the warm months.

Chaos all over the world, darling kittens, and the times are about to become even more explosive... keep watch but hunker bunker down as much as possible. And remember, this Big Cat loves ya!
~~~~~~

So where were we? I know I've been posting only the first part of each chapter, but you really need all of chapter three for chapter four, the bar fly sceen where Marissa gets her mind blow seeing Lamar but nekkid and looking like a Ken doll. And I really want to share that one, because she freaks out just a little and gets caught checking Dante's jeans to see if he's got a bulge. So anyway. The rest of chapter three. Also, for those who are late to join us, I am including linkies to the previous posts of "Witch's Moon." Enjoy!

HEADLINE ~stevequayle.com~ Has King David's citadel been found? Israeli archaeologist claims to have discovered site captured in the conquest of Jerusalem

YOU CAN'T WALK AND TALK AT THE SAME TIME 'NEWS' ~

Taiwan Proposes Fining ‘Distracted Walking’ Due To ‘Smart Phone Addiction’
Tech Dirt | “Will we now see legislation proposed to ban walking while yakking on your mobile phone as well?”
~~~~~~