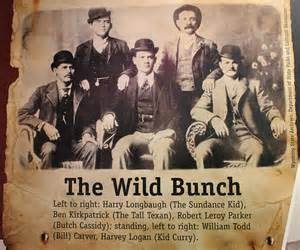 Like many of us, I am fascinated and downright enticed by Old West lore. I grew up on TV and movie Westerns. I loved the horses, and the whole *spirit* of those times, those people who survived and thrived despite the hardships -- that is, as I understood it then. After all, freedom, and the spirit of adventure owns my soul. Yes, I am wild at heart ... something the current Big Brother system hasn't totally beaten out of me...yet.

The story of Butch Cassidy and the Sundance Kid...well who can forget that infamous movie and *randrops falling on your head*? if you watched this popular-at-the-time movie ... knowing movies are fictionalized, I've always been curious about the true story of these two legendary, train-robbing outlaws, Butch and Sundance... well, there is far, far more to their life story, to those times than one could ever imagine ... as I've discovered by my limited research, and by listening to this Coast Coast am SHOW with the 'legendary' investigative reporter, George Knapp.

Note: I've been overwhelmed by life stuff lately, so I haven't been blogging like I want...but I just had to share this...

Butch Cassidy was a notorious train robber, bank robber, and leader of the Wild Bunch gang in the American Old West. Kerry Ross Boren, founder of the National Center and Association for Outlaw and Lawman History, and Lisa Lee Boren joined George Knapp to discuss irrefutable proof that Butch Cassidy was alive and well after his supposed death in 1908. Many of Kerry's relatives and ancestors either knew Cassidy or were part of his family. "My maternal grandfather helped him rob a train," said Boren. He stated that Cassidy (AKA Robert Leroy Parker) returned from Bolivia (where legend says he died) and lived out the remainder of his life anonymously in the western U.S. Lisa gave some insight into the differences between Butch and Sundance as she pointed out that "Sundance was a deadly killer, whereas Butch never killed a man" and was "known for his benevolence to many people."
Kerry said that the bodies of the outlaws were exhumed in 1985 for a television documentary and that the DNA did not match any known relatives. Combined with the testimony of family members and others who knew them, Kerry believes that "the evidence is overwhelming" that they survived well beyond their legendary date of death. Lisa indicated that the evidence is strong that Sundance (AKA Harry Longabaugh) returned to the U.S. after a career as a soldier of fortune and died in a Utah prison under the name of "Harry Bebe." Kerry concluded that the interest in the story remains high because the two "were captivating characters and everyone wants to believe they got away."

In the third hour, Jerry Nickle joined George to discuss his contention that the Sundance Kid is his great-grandfather. Nickle remembers his family telling tales of a relative who was a member of the Wild Bunch, but did not begin to suspect that the man was actually Harry Longabaugh until he saw the famous picture of the gang taken in Fort Worth in 1900, which he believed matched other known photos of his great grandfather. Nickle said his research indicates this man, whose name was Harry Long, was mistaken for another outlaw with the name of Longabaugh, and the identity stuck. Nickle’s believes that Long/ Longabaugh returned from South America in 1909 to rejoin his family in Utah, and that he was either killed by another surviving member of the Wild Bunch or committed suicide sometime in the 1930s. After looking at the historical records of both Harry Long and the Sundance Kid, Nickle said that "the timeline is a 100% match."

FAMOUS ROBBERY WAS AN INSIDE JOB

In the last hour, biographers Chet and Kim Brackett detailed the history of Tap Duncan, an associate of Butch Cassidy who likely pulled off one of the most famous bank robberies in the Old West. On September 9, 1900, the First National Bank of Winemucca, Nevada was robbed of over $30,000. Chet Brackett claims that one of the perpetrators was his great-grandfather, Ira Brackett. Chet said that Tap Duncan, who later became known as a famous rancher in Arizona, and led the gang that pulled off the robbery was contracted to do it by none other than the head cashier in order to cover up financial malfeasance that would have ruined his political career. He said that the crime was "very carefully planned" so that no one would be hurt and that the escape would be successful, and that Duncan later spread the rumor that Cassidy had been responsible. While cleaning and remodeling an old family home, Chet says he found letters and other papers that told this story. Unfortunately, he says the papers were lost in a house fire.