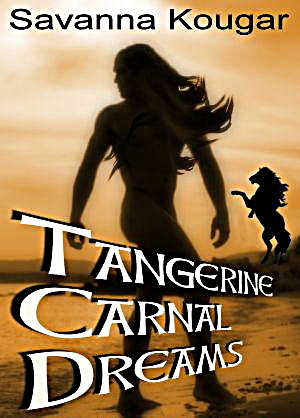 This week’s theme: My Special Kind of Sexy

I'm feeling downright frisky and contrary this week. I don't want to color inside the lines as far as doing a regular promo on the books I've already written ... well, okay, I did write TANGERINE CARNAL DREAMS, which was released on 8/8/08 by the ill-fated Aspen Press -- a going concern who's owner ended up being a criminal ... but that's a whole other story.

Tagline: a fire-shooting fierce woman...a shapeshifting prince of a stallion...and the tangerine aphrodisiac winds on a world far away...

“Asteroid crapola!” Katta muttered. Impatience sliced through her with a viciousness unusual to her. From her intel-alliance with other intergalactic law agencies she knew Zio, the sky horse, as she thought of him, practically stud-nipped at her butt. Once again.

His private vessel was due to dock shortly. True to his equine race’s mating behavior, he’d chased her to every spaceport, his pursuit annoyingly relentless.

Slinging her lightweight travel bag onto her back, Katta entered the stream of disembarking passengers. Distracted with thoughts about how to escape the stud not-of-her-dreams, she remembered to smile at the star cruiser’s steward as if she was merely enjoying her vacation.

The tiger-shifter Huugosox man smiled engagingly in return. His direct gaze suggested he found her more enticing than the women ahead of her, who exited through the opulent-appearing hologram.

Yeah, that’s what she so needed, a sex-clawing tiger instead of a wild-to-mount-her-ass stallion.