My Sexy Saturday ~ WAITING FOR A FILLY GIRL ~ like stallions fighting 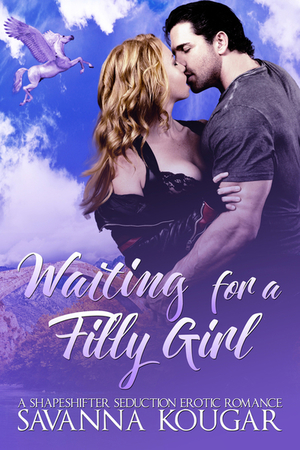 Sexy Saturday kisses, everyone, and have a wonderful Easter weekend.

This week’s theme: Sexy to the Rescue
Drev is a man who will fight for love no matter the cost. When his Keina is abducted by the sleazeoid prince, he dives through her world's portal to save her.
Tagline: Ex super-soldier boy meets winged filly girl. Will they live happily ever after? In Wolf Peak territory anything is possible.
~~~
Setup: Drev is fighting the prince to win his Keina.
Seven paragraphs ~

Seconds before the knife would have stabbed into his side, Drev deflected it. He barely heard the clattering sound as the blade hit the glistening marble beneath his feet.

He and Tretorff lunged at each other. Like stallions fighting over a mare, their chests crashed together. The collision resounded throughout the courtyard.