hailstorm... then the real fun began... 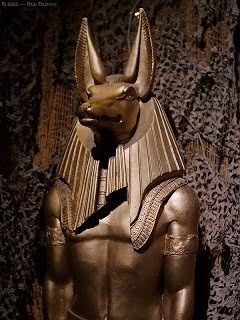 This Copper Statue in Kincaids Tunnel  in the Grand Canyon was identified as a Shrine for Anubis. ~https://sites.google.com/site/ancientegyptiansinamerica/ancient-egyptians-grand-canyon~

Late night mews, most lovely Felines... wow! ... what an odd-duck weather day on the tame prairie... the skies were leaden with rainclouds during the morning... then about mid-afternoon, the storm moved in with high winds, and a crack of ominous thunder... anyway, rains splattered, then crashed to ground, all while the wind blasted and this strange loud roar that sounded like it was machine-made continued above... at first there was tiny hail included with the rain... then a pea-sized hailstorm for several minutes... that stopped, but then the real fun began... a raging hailstorm hit with pea-sized to large marble-sized hail stones, the hailstorm lasted long enough to end up covering the ground... this Big Cat was worried for a time that her windows would break... then, strangely, suddenly, there was blue sky and the sun shone brightly... and the temps jumped up to near balmy... even so, it took a long time for those little ice suckers to melt.

And how was your day, darling kittens? Remember strange weather times ahead on planet Earth. Prepare, 'cause this Big Cat loves ya!
~~~~~~

The Kougar got some more done on her secret project.

And, she did a lot of fun, fascinating research on the following:

Ancient Egyptians, Burrows Cave Illinois: IMPORTANT BACKGROUND INFO, IN THE FACE OF MAINSTREAM DENIALS! REMEMBER THE POWERS THAT BE ARE HIDING THE POWERS THAT WERE! ~https://sites.google.com/site/ancientegyptiansinamerica/ancient-egyptians-burrows-cave~
~~~~~~