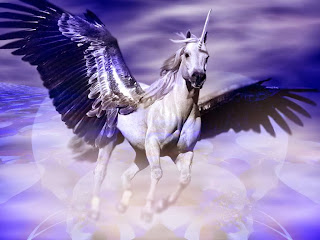 at SHAPESHIFTER SEDUCTIONS
The gorgeous winged Pegasus above is not Zondros, the Kougar was searching for a wind horse but found this fantasy beauty instead.

Late night mews, wind dancing Big Cat Beauties... quite the windstorm raging across the tame prairie right now... earlier, the winds were so strong, it sounded like low thunder... some lightning, some rain... but mostly howling winds! ... during the day, it was muggy hot... yes, another madcap busy day for the Kougaress... and still, not enough gets done.

Keep your tails tucked, and hunker bunker down, darling kittens. 'Cause this Big Cat loves ya!
~~~~~~

So, the Kougar has been writing on her secret project.
~~~~~~

This week we meet the hero who would rescue our fair werewolf witch from a pack of pursuing mutant werewolves.
~~~~~~

Zondros, ace pilot and monster hunter, swooped low over the tall pines but pushed his modified helicopter to full speed. The instant Dante had gotten wind that his sire, Damien, was on the move, the alpha wolf leader had contacted.

They'd been best buds through several skirmishes in the jungles of Thailand, rescuing hapless humans from the demon trolls who infested the outlying areas. Of course, this had been after they'd pummeled each other with bare fists for hours. Later over beers Zondros realized the werewolf was his ally, not a mindless fiend.
~~~~~~

HUGE ANCIENT MEGALITHS IN RUSSIA -SIMILAR IN SIZE TO BAALBEK-ASTONISHING IN SIZE! ~englishrussia.com/2014/03/06/huge-mysterious-megaliths~

4,000-year-old Dartmoor burial find rewrites British bronze age history
Stone box contains earliest examples of wood-turning and metal-working, along with Baltic amber and what may be bear skin. — The Guardian
~~~~~~