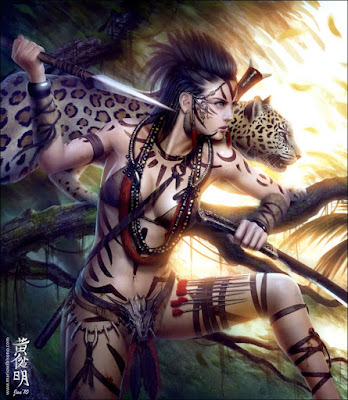 Late morning yowls, most precious Big Cat Beauties... so, on and off rainshowers on the green-jungly tame prairie... this Big Cat has been under the weather again, and recovering again... so that's a good thing... however, she just can't keep up will all the breaking, really IMPORTANT news not reported by the plastic-doll, presstitute media... thus, she MIGHT... the Kougaress hasn't decided for certain... but she might post much shorter bloggies whenever she can manage it... her schedule right now is crazy busy too.

Time to hunker-bunker down, most darling kittens, and make friends with those in your immediate community, with those you can work with. And remember, this Big Cat loves ya!
~~~~~~

Not Today
by Pat Cunningham

Sorry, folks. No post today. I'm not sick or anything. I just couldn't get my s**t together. I had a couple of ideas, but nothing would gel. If I can get myself back on track, I'll post something Thursday. Anyway, it's Monday. Who does anything on Monday?

Kazmyra tightened the reins on her battle mare, a signal to rear high. Mightily swinging her blade -- half the length of her body -- Kazmyra slashed through three of the monsters tentacle-arms in rapid succession. The giant beast with the face of squid and protruding teeth like daggers had been about to capture, then crush her.

High-pitched screams of rage pierced Kazmyra's ears as she spun her mare away from the thirty-foot beast's charge. The defensive sounds were meant to stun her into helplessness. But failed.