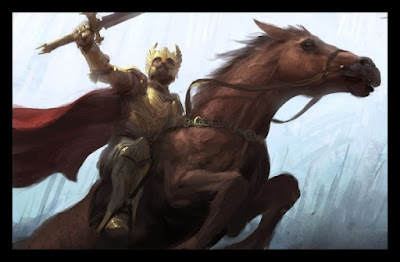 So, I've been under the weather the last week, and am recovering now. But everything is on slow mode, as far as getting anything done. Which includes my flash scene for today, a riff off Pat's flash from yesterday.

Instinct demanded Kelila flatten herself against the brick building. Instead, her contrary nature kicked in, and she stilled, merely staring as the small herd of stallion shifters charged past her. "How can it sound like a stampede when they're wearing running shoes?" she muttered under her breath, then briefly shook her head at it all.

With her curiosity engaged, Kelila watched the 'racers' skid to a rough stop in front of Rattigan's. They shouldered each other in a battle to win first entry.