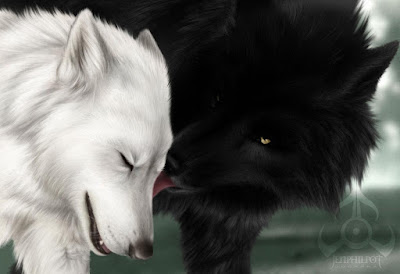 Rainy June day mews, cozy and curled up Big Cats... so, the rain have returned to the tame prairie... it had dried out for a couple of days... so far, no actual flooding here, and the Kougaress is always glad she lives atop a long incline... anyway, yesterday this Big Cat had to do some heavy lifting, as in physical lifting... and given her health, she wore herself out too much... even though, her health has gradually improved, still it's all too easy to get fatigued to the point where not much else gets done... also, with the fast-river rising of critical events, thus, the increase in alternative news... well, the Kougaress just can't keep up anymore... but she does her best.

Take care, and watch out for the superstorms of life, most darling kittens. 'Cause this Big Cat loves ya!
~~~~~~

Yes, more done on the Kougar's SHAPESHIFTER WIP. Waiting For A Filly Girl... she hopes to get more done later... it really is a fun story, it's just this Big Cat author is usually pressed for time.

Plus, Rebecca Gillan, one of our SHAPESHIFTER SEDUCTION authors, is on the final stretch with her first novel set in our Talbot's Peak world, which is WITCH'S MOON. Exciting!
~~~~~~

Now this is how it was done in the classy neighborhoods. No running around sniffing each other's tails and getting buck nekkid in the woods. Well, yeah, okay, but that could come later. First you got to know the girl. You stuck those pesky (but fun) animal instincts in the closet and treated her the way a lady wants to be treated, like royalty.

Normally that meant running down some kind of prey animal and laying the bloody corpse at her feet, but today it meant a rowboat on the lake in the woods and a peaceful glide around the water. And pay no attention to that big, surly bastard slouching along on the shore, annoyingly paralleling their course.

"Predator drone, you'll never see it coming," White Fang, super wolf, growled under his breath. Drily, he imitated the very words of the current, so-called leader of the free world.

"Yes, you will," he growly muttered, "if you have super hearing, then search it out with your super vision."

On night patrol, White Fang hovered high above Talbot's Peak territory. Given this was the second incursion of their airspace in as many days, White Fang hurled himself through the cool, dew-laden air like the infamous speeding bullet.
~~~~~~

Facebook Just Announced a Controversial Move that is Going to Infuriate the Police State
Free Thought Project - Monday morning, Facebook announced its own encryption service. According to the Facebook announcement: To enhance the privacy of this email content, today we are gradually rolling out an experimental new feature that enables people to add OpenPGP public keys to their profile; these keys can be used to “end-to-end” encrypt notification emails sent from Facebook to your preferred email accounts. People may also choose to share OpenPGP keys from their profile, with or without enabling encrypted notifications. PGP stands for Pretty Good Privacy. It’s actually very good privacy. If used correctly, it can protect the contents of your messages, text, and even files from being understood even by well-funded government surveillance programs.
~~~~~~

First UFO Spotted at Recent Japanese Volcano Eruption
One of the most predictable places to see a UFO is at the site of a volcanic eruption, so it’s no surprise that one was spotted passing the eruption of Mount Shindake on Japan’s Kuchinoerabu Island on Friday, May 29th, 2015. What was this UFO and why was it there?
The 9:59 a.m. eruption of the 2,000 foot (626 m) peak shot a plume over 5 miles (9 km) into the air, prompting the highest level alert and forcing the immediate evacuation of the sparsely populated island. Mount Shindake hadn’t erupted since August, 2014, and was dormant for 34 years before that, so its eruption this week was a surprise.
Except possibly to the UFO which appeared shortly after the eruption.
~mysteriousuniverse.org/2015/05/first-ufo-spotted-at-recent-japanese-volcano-eruption~

UFOs and the Robertson Panel
Wednesday, June 3, 2015
Nick Redfern writes about why the contactees of the 1950s – such as George Adamski, became the subjects of extensive, official government agency files. — Mysterious Universe
~~~~~~

Is Amelia Earhart's plane in Nikumaroro?
Sunday, May 31, 2015
Researchers will be attempting to locate the remains of the famed aviator's aircraft next month.
— Unexplained Mysteries
~~~~~~

WHERE ARE THOSE DRONE BOUNTY HUNTERS? 'NEWS' ~

YEAH, YEAH, MORE PROMISES BY THE DARK-SIDE ESTABLISHMENT... WHERE ARE THE FLYING CARS???!!! 'NEWS' ~

Star Wars speeder bikes comes a step closer to reality
Sunday, May 31, 2015
Dubbed 'Flike', the tricopter prototype recently took to the air for the first time in a series of test flights. — Mail Online
~~~~~~

Memories can survive cryogenic preservation, study shows
Wednesday, June 3, 2015
Nematodes were taught to react to the smell of benzaldehyde before being frozen for 30 minutes and then their memories of the smell were tested — DailyMail.com
~~~~~~

Aggressive 'walking' fish is heading south towards Australia, scientists warn
Wednesday, June 3, 2015
The climbing perch, which can live without water for six days, has spread across Indonesia and Papua New Guinea. — The Telegraph
~~~~~~