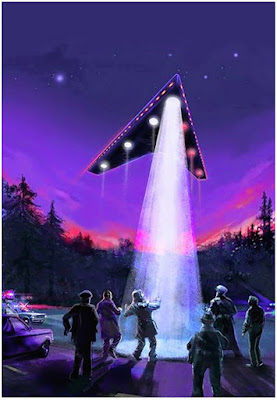 My friend Dale Hendrickson, an acclaimed effects artist for film and TV (and also a longtime character designer for "The Simpsons"), has just created an incredible painting of the Lumberton UFO encounter. If you look closely at the painting, you'll notice one of the eyewitnesses standing with his arms apart, looking up at the UFO. That individual was ME.
~coasttocoastam.com/pages/speigel-images-9-26-15~
~~~~~~
October yowls and mews, Autumn Resplendent Felines.... so, delightful sunny coolish weather on the tame prairie... the Kougaress has made some good progress on cutting off and sawing off more limbs from the dead thorn tree that fell over her drive, fairly close to her mailbox... the main arch the tree trunk formed over the drive is still there... however a lot of the poison ivy vines has been cut off... this Big Cat is still deciding what she wants to cut off next... the other night this Big Cat was just about to go to sleep when this racket ensued... well, it turned out to be in the attic on top of the attic fan... and was likely a squirrel because when the Kougaress turned on the fan, thus to get rid of the critter without harming said critter, a pecan fell through, which had gnawing marks on it... yep, the joys of living on the tame prairie. ~smiles~

Take care, most darling kittens, and watch your adorable butts. 'Cause this Big Cat loves ya!
~~~~~~

THIS BIG CAT JUST LOVES HUMAN CREATIVITY... AND PROJECTS SUCH AS THIS!!!

Architect Uses Cardboard to Build Usable Bridges, Pavilions, and Emergency Housing
by Christina Sarich Posted on September 15, 2015
At first glance, you would never imagine that Japanese architect, Shigeru Ban’s bridge over the Gardon River in Southern France was made of cardboard tubes. Its design is simple, though elegant, and the bridge can soundly hold twelve people at one time. This isn’t Ban’s only claim to fame, though. The architect also takes the homeless man’s cardboard box to a new level with his emergency housing design.
~naturalsociety.com/architect-uses-cardboard-to-build-usable-bridges-pavilions-and-emergency-housing~
~~~~~~

The Kougar is about the write Chapter Forty-two of WAITING FOR A FILLY GIRL, her ShapeShifter Seductions WIP... In this chapter Dante has a mission for the heroine and hero, Keina and Drev... and for the secondary characters, Dugger and Symone... Dugger is a downunder dingo shifter, and Symone is from a parallel Earth.. . she's an aerial-platform sharpshooter. Yep, they must help save Talbot's Peak territory from a sky invasion of drones.
~~~

Monday, September 28, 2015
Overheard at First Lunch Period
by Pat Cunningham
Sophie Miller barely got in one bite on her watercress-on-wheat sandwich before Drew Klein flopped down on the chair beside her. His elbow almost knocked her juice box over. He paid no attention to her or the disaster he’d nearly caused, simply dumped his own lunch, a pile of fresh fruits and veggies, out on a tray. He began to chow down as if he was all alone at the lunch table.

“Hey!” Sophie said. She edged her chair and her tray out of harm’s way. “Watch where you’re sitting, you big ox.”

“Buffalo,” Drew corrected with a carrot stuffed into his mouth. “Can’t you tell the difference by now? I thought you goats were supposed to have good eyesight.”

“It’s pronghorn,” Sophie informed him archly. “Can’t you tell the difference by now?”

“Whatever.” He continued to chomp loudly.

Did the man lift mountains as a hobby?
by Savanna Kougar

Here's another continuation of my recent flash scenes, *One Shade of Silver Wolf* and *Thundercloud yanked on his mental leash.*.  Thundercloud and Kailla are at Talbot Peak's BBQ cookoff and faire, standing at one of the arts and crafts booths.

Did the man lift mountains as a hobby?

Kailla willed her feet to move, to become unglued from the sidewalk. She needed to walk away, walk anywhere...leave! ... there was just something about the man standing behind her. That 'something' tingle-shivered through her as if she suddenly found herself naked on a iceberg. What the hell?!

'Move!' she commanded her feet, even as the man began to answer the carver.

"Perfect, Carl. Those silvery shades are most popular with our customers. Count on my brother, Storm, to be in touch soon."

With the man's towering low voice doing the silky dance through her, Kailla twisted around to get a glimpse of him. Yeah, she'd failed. But, who had a brother named Storm? And he was called Thunder...

Gloria was spending the evening as she spent most evenings, gazing adoringly at Moon-moon, her sexy brainiac werewolf boyfriend. She wasn't sure what turned her on about him most. His body was any woman's wet dream, all tall and sinewy. Lots of rolling muscles tucked under velvety smooth light skin, and toffee colored hair that was always shaggy and messy, making her think he'd just rolled out of bed and wouldn't mind taking her back into his bed to play. She'd be lying, though, if she didn't admit to being totally seduced by his exceptional brain. He was both a friggin' genius with anything electronic--literally--and he had a very sophisticated sense of humor most people were too full of themselves to understand. He was playful, finding joy in every moment. And then there was the thrill of danger. Hello, he was a wolf!
~~~~~~