Kassy fumed and frowned, hearing... Summer of Her Golden Wolf 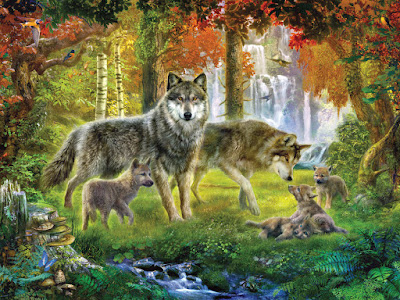 My latest domestic adventure? Dealing with a small freezer I ordered since my old fridge is losing ground when it comes to cooling. Once again, my kind neighbor came through, and I managed to maneuver this chest freezer into position...that is, once I did another rearranging and cleaning project. It's amazing what you find sometimes, that you forgot you had. ~grins~

Okay, I was a guest on Delilah Devlin's blog yesterday. The title of my post is: The Shooting Star Rise of the American Cowboy ~http://www.delilahdevlin.com/blog/2017/07/06/savanna-kougar-the-shooting-star-rise-of-the-american-cowboy~

Anyway, I think I did pretty fair job of answering my opening question: Why do I love writing cowboy heroes in paranormal settings?

Alrighty then...I checked out the Smashwords survey wanting to discover a possible direction ... or what to concentrate on ... that is, if I ever get enough time and energy to write regularly again. It's really been frustrating! ~big sighs~ However, I didn't discover any useful direction. Although, it's good to know ROMANCE NOVELS are still the big sellers.

Yes, I managed two more flashes with my heroine, Kassy, and her hero, Zorzun.
Also, I made a page~check the tabs above~for SUMMER OF HER GOLDEN WOLF... 'cause eventually this flash-scene story will get too long to post every time.

IV
She drew him like a super-charged magnet. Zorzun forced himself to continue his casual stride toward Hendricks Mill, where the mined gold had been processed. Howl about fate's inopportune timing. Here he was on a mission, and mating excitement gnawed at him with vicious fangs. He hadn't even seen her. Not yet. Wait! Zorzun halted in his tracks, sniffing again. By the grace of Mother Shining Moon, the demigod's supernatural odor slapped his nostrils. More intriguing, the woman's scent mingled with Pellegro's. They stood together inside the ore mill. Howls, yes! Zorzun hurried his steps as fast as he dared.

V
"Wolf?" Kassy blurted out. Damn, wish I hadn't said that. Leave, she told herself, before something weird, something not-good happens. Intending to slip around Mr. Rooster Guy, instead Kassy found herself sandwiched between two tall muscular men. Very *yum* muscular men. Her breath jerked inward. As quick, the air whooshed out of her lungs. Great, how embarrassing. "Excuse me." Kassy took a step. The wolf, as Mr. Rooster called him...he moved with her, blocking her escape. "Pellegro, may I assume?" Mr. Wolf's deep resonant voice shivery-melted Kassy—to her shock. No, no! She stiffened her spine. "Get out of my way."

VI
"Pellegro, may I assume?" Zorzun made damn certain the flame-haired woman remained caged between him and the half-god.
"Get out of my way." Even though her tone was soft, controlled, her words pelted him, both ice and fire.
"Ma'am, I'd like a word with you. Please."
"What for?"
Picking up her mental vibes, Zorzun knew the woman pressed against him, wished like hell she could stomp his foot. Leave. Given he sported cowboy boots, and she wore running shoes, he was safe. Zorzun grinned to himself.
"At your service. To whom am I speaking?" Pellegro smirked, understanding glinting his eyes.

VII
Now what? Kassy fumed and frowned, hearing...
"Zorzun is my handle. Dante sends his regards. Where would you like to speak?"
Zorzun, what an unusual name. Does he have to feel this good? Dammit!  Irritated, her anger rising, Kassy wriggled wanting to edge her way out. Nope, she stopped. He liked it  too much.
Should I scream, make a scene?
"There's quite the lovely picnic spot by the water at Vigilante campground. Do you know the area?" Pellegro's accent intrigued Kassy. Who was Mr. Rooster?
"I do. Should I bring lunch?" Zorzun cupped her shoulder, so gently she couldn't complain.

VIII
The woman he thought of his already, the woman he touched, singed him with her inner fire. Given her fury to be free of him, Zorzun figured he should be going up in flames. Howls, he'd be on mating fire once they...
"I have enough lunch to share." The smirk stayed on Pellegro's face. "I'll expect you in an hour. Bring a bottle of wine. You are a connoisseur, correct?"
"Your preference?" Zorzun arched his brows.
"Surprise me."
Before he could blink, the half god spun away, and was strolling down the path.
"Wow, where did he go?" his woman murmured.