"Oh no." Kassy held her breath... Summer of Her Golden Wolf 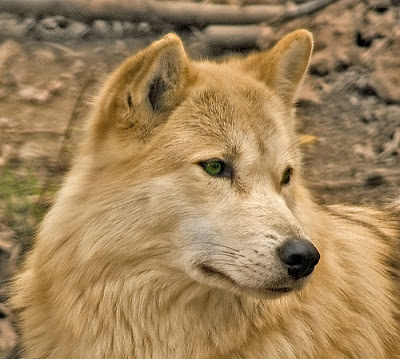 One of the golden fur wolves in Wolf Peak Territory ... a snapshot.

Aww...summer life on my tame prairie... yesterday, I had the extreme pleasure of watching a beautiful brown hummingbird through my fave western-facing window ... Hummingbird came close a few times, only a couple of feet away... what a joy, and hummingbirds are supposed to be good luck. I sure do hope so. I could use it.

A couple of nights before, I had a toad encounter. I'd seen a few tiny baby toads hopping about outside my backdoor and on the gravel grassy driveway... anyway, it was about three in the morning when I heard this crinkling sound. I thought it was a mouse who had gotten into the house. Since the crinkling wouldn't stop, I smacked the area with a pillow more than several times hoping that would frighten the critter away, so I could go back to sleep. Nope. Then, I caught a quick glimpse of this critter that hopped high... so, the ole brain kicked in, and upon further inspection I found a calming sitting half-grown toad. Having had a toad friend many years ago, who would go to the door to be let out, I have a real fondness for the toadikans kind. Since it's dangerous for Toad to be in the house, well, the chase ensued... and it was a merry one indeed... with small box in hand and a makeshift lid, I did my utmost to convince cute toad to jump in and let me put him/her outside... after many failures, finally I was able to urge Toad to jump inside, once again, and I got the lid on fast enough... well, Toad didn't jump against the lid at all, and I got him/her outside, then gently turned the box so *born free* toad could be on his/her way. With decorum, Toad left the box, and casually hopped away... and didn't seem to be traumatized at all. Of course, I told toadikans that I was only trying to help him/her go outside. The only problem with this chase, I desperately needed uninterrupted sleep... but that's the way it goes, and I do like those toadies. Always have, since I was a kid and watched them in the basement window wells of our house. Live free and happy, Toadie cutie.

So, yes, I managed another two hundred words of my ongoing flash-scene story. The previous flash scenes can be accessed above. Just click the tab for the page.


IX
"Oh no." Kassy held her breath and covered her nose. Too late. A couple wearing clothing saturated by cigarette smoke passed by. "Allergic. Don't call 911. Please, don't. They'll kill me," she gasped out before the seizure hit. Her knees buckled, and Kassy collapsed, helpless, unable to speak. Yet she remained conscious, aware, as usual.
Zorzun's strong arms, amazingly strong, caught her. "How do I help you?" His whispered words felt intimate. Somehow.
Can't speak. Dammit. Frustration knifed Kassy, and she wished like hell the seizure would end quickly. She never knew how long it would last. Only that she recovered.

X
Zorzun held the limp body of his woman close. "It's okay," he told several people who looked on with concern, and were poised to call 911. Lifting her into his arms, he added, "she had the flu recently. I'll take her to the hospital, have her checked out." As he strode toward his blue Ranger truck, Zorzun performed a mental scan automatically. What was wrong with her? He'd have to search deeper. No matter what, he'd find a way to heal her. Zorzun figured the curvaceous redhead was in her fifties. No problem. He owned a hundred and fifty-five years.