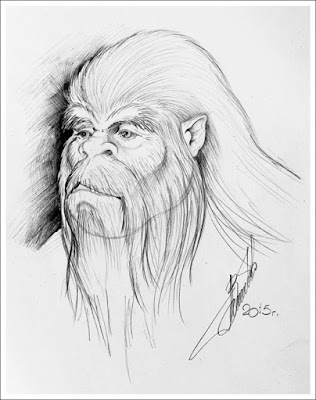 Siberian artist claims he had close encounter with Yeti
Tuesday, August 25, 2015
Artist and sculptor Andrey Lyubchenko says he came face to face with an Abominable Snowman less than a month ago.
Like the Lock Ness monster, summer is the usual time for sightings, but until now there had been no known appearances this year by the 'mythical' Yeti in eastern Russia.
This has changed with well-known Tashtagol artist and sculptor Andrey Lyubchenko's claim that he came face to face with an Abominable Snowman less than a month ago.
What's more the Yeti posed for him - allowing the artist to draw his picture on birch bark - and the pair even managed to 'speak', he claimed.
'It happened so unexpectedly and fast that I had no time to get scared,' he said. 'There was a clear feeling that this was a thinking creature, I felt he was trying to 'talk' to me.
'The Yeti was about two and a half metres tall, with thick dark brown hair like a bear's - but a lot softer. He was holding a wooden stick, with bits of hair wrapped around it. But the main thing was his eyes, they were just like light-coloured human eyes.'
At the time he was in the remote taiga in Kemerovo region, well known as the Russian region with the most Yeti sightings.
~siberiantimes.com/other/others/news/n0362-artist-claims-he-had-close-encounter-with-yeti~
~~~~~~
Evening yowls and mews, precious and precocious KitKats... looks like there's a brief summer storm coming in, the thunder is acting up... and it's dark outside... mostly lovely days on the tame prairie, however... with that wonderful dry air...
Be well, and take care of yourselves, most darling kittens. Prepare as you can. 'Cause this Big Cat loves ya!
~~~~~~

Some good writing time in, and the Kougar can only hope it continues. *knock on wood* ... She's finishing up Chapter 36 of WAITING FOR A FILLY GIRL and she's about to start Chapter 4 of WARRIORESS.
~~~

Monday, August 24, 2015
Cake Boss
by Pat Cunningham
Salome stopped herself just in time. One word, one wrong sound at the wrong moment, and Telly’s steady hands might jiggle and there would go hours of work. She held herself still as a rock in the kitchen doorway, scarcely daring to breathe.

“It’s okay, sweetie,” her husband said without turning around. “I know you’re there. I’m good.”

She let her breath out, relieved. “I’ll wait here. Just to be safe.”

Salome caught her breath again, this time over the icing artistry he’d just applied to the cake. Delicate pink and blue flowers. Winged candy ponies. The entire two-tiered confection had been sculpted into the shape of a Medieval castle in white cake and vanilla icing. Little flags with 8s on them flew from the turrets.

August 25, 2015
One Shade of Silver Wolf
by Savanna Kougar

I've started what I hope will turn out to be a new series of flash scenes. We'll see, given my *who knows what obstacles are next?* life.

Anyway, I hope you enjoy. Because I'm pressed for time, I'm not even going to do a read over as I usually do, so please excuse any glaring mistakes.

One Shade of Silver Wolf

She'd known he could never love her. Not as she desired. Truth: she'd been seduced by his scholarly knowledge, by his extraordinary super intellect. Yeah, Einstein meets Carl Sagan, mix brains and stir. Then stand back in pure awe. That was Professor Edward Kingston.

During their two-year relationship, he'd treated her more than decently, and loved her in what he considered to be the proper manner. But at a deep emotional level the about-to-be chancellor, Professor Kingston, was bankrupt — as bankrupt as The Donald Trump had been four times in his entrepreneurial, meteoric rise to reality-show stardom.

Oh, she'd told herself Professor Ed would come to love her with a passion unparalleled. What a big fat lie.
~~~~~~

Dr. Albrecht: "Windows 10 Is Full Blown Draconian Electronic Tyranny" (Video)
[Dr. Albrecht: ] CONTRIBUTOR: Voice of Reason. FOR MORE NEWS BY VOICE OF REASON CLICK HERE! I’d already read that Windows 10 was massively invading people’s privacy, but I’m a loyal Mac user, so I never paid the articles any serious attention, however after listening to this show, this is downright TERRIFYING! Yesterday, I posted We Know... ~beforeitsnewscom~
~~~~~~