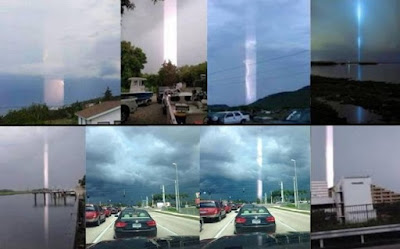 Strange Beams Of Light Captured In Italy, Mexico, And The US! What Are They? ~ By Susan Duclos - All News PipeLine ~ August 20, 2015
Another one for the weird and unusual file as we see strange beams of light captured in amazing photos from around the world in August, which has created a firestorm of Internet chatter from people trying to explain this mysterious phenomena which is reminiscent of the viral sensation captured at the Kukulkan Pyramid photographed by Hector Siliezar on July 24, 2009.
The latest of these strange large beams were photographed in South Fort Myers Florida, USA on August 15, 2015 and in Civitavecchia Italy on August 10, 2015.
~allnewspipeline.com/Strange_Beams_Of_Light.php~
~~~~~~

Sunny afternoon yowls and mews, specialist Kitkats in the world... still weather-mild with dry air on the tame prairie, and during the last couple of days it was downright cool for this time of year... which is welcome... but gosh, then you have to worry about how cold it's going to get during wintertime... which they [whoever 'they' are] ... anyhoo, they're saying it's going to be a nasty cold winter... exactly what the Kougaress does not want... ~sighs~ right now, though, it's green and absolutely beautiful... and the north neighbor is finally haying their fields... oh, and on her trek down to the mailbox... well, there were cattle hoofprints and cow patties... it's a mystery, given the south neighbor said their cattle were on a rented field elsewhere, and this Big Cat hasn't seen any cattle at all in the north neighbor's fields this summer... so where the critters came from and where they went, the Kougaress has no clue???

Have a wonderful weekend, most darling kittens. But get ready to hunker-bunker down and keep stocking up as best you can. 'Cause this Big Cat loves ya!
~~~~~~

So, the Kougar has gotten some good penning done on her two WIPs, WAITING FOR A FILLY GIRL and WARRIORESS. She is crossing her claws in hopes it will continue.

And, hopefully she can remember to sign up for the linky blog hop MY SEXY SATURDAY at  ~mysexysaturday.blogspot.com~ and will be posting at TITLE MAGIC ~titlemagic.blogspot.com ~
~~~~~~