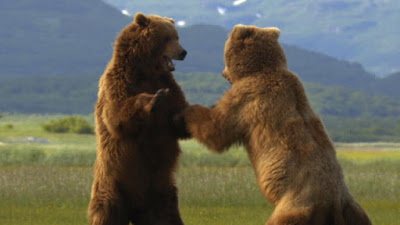 Once again: To Quote: "Our Talbot's Peak saga continues. The bad guys have made pests of themselves, and are harassing our beloved mayor, Gil. Well, they just might be real sorry after Operation Crunch."

Okay, how sorry will the bad-guy bureaucrats be having to drive a wolf and saber-tooth mangled car that has also been especially decorated by Miss Cardinal and her bird-shifter friends?

That is, after the bear shifters get done with them
~~~~~~

Kitty couldn't help herself. Her stunned and feline-fascinated gaze glued itself to the super-tech screen Blade Runner had provided. Not to meow out loud, but she kept bending closer observing Carlotta's fast and furious aerial maneuvers.

Next, the cardinal shifter invited her feathered friends, and Kitty watched in astonished awe as they flew diving patterns, decorating the now mostly unrecognizable car. At some point, Carlotta's leadership turned them into an attack flock. The mostly white splotches and splashes were applied with precision -- as if they'd practiced as a drill team.

Applauding the motley-crew flock's performance, Kitty clapped her hands, but softly so she wouldn't alert anyone outside her office. Oh clawing-yeah, she made up her mind to recruit the fiery-spirited cardinal as one of her *keep Talbot's Peak safe* team leaders. Carlotta was a natural.

"Got 'em spotted," Ralph da bear signaled. Shifted, he spoke in bear-growling language, then tromped loudly toward the two state agents who still ran for their lives. "Those stinky suits are headed your way, Ben."
~~~~~~