...her stripes showed whenever... 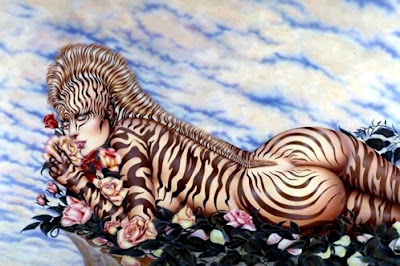 So, the inspiration for this flash scene hit the other day, and I couldn't resist playing it out. I hope you enjoy.


...her stripes showed whenever...

Sapria emerged from a relaxing shower. She smiled as she toweled off her faintly striped skin. Being a zebra shapeshifter, her stripes showed whenever her body temperature heated up.

Several years ago, she'd given up being with human men. The explanations about her stripes had worn thin as a late winter pasture. So, when the opportunity to move to Talbot's Peak territory, and work at the Pleasure Club, had shown up unexpectedly, she'd jumped at it. No, she'd raced toward it.

Sapria reached for the bathrobe, and slipped into the all-engulfing white terry. She let a long sigh escape further relaxing her shoulder muscles. While she enjoyed being a server at the Midnight Stardust Club, they'd been unusually busy this past week.
~~~~~~