Wanna Ride In the Dragon-Mobile... 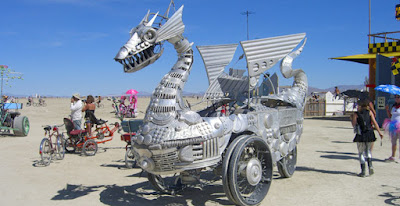 What a cool Dragon-mobile at the Burning Man Festival!

Mail Online Article: FBI Agents Spy on Burning Man Festival to Prevent ‘terrorism,’ Test Out New ‘intelligence collection’
FBI agents have been 'intelligence gathering' at the alternative festival since 2010, they admitted
The FBI has admitted to gathering secret intelligence about the annual Burning Man festival since 2010.
In response to a request under the 2012 Freedom of Information Act, the security service said its Special Events Management unit has kept files on festival-goers, known as ‘burners’ – to ‘aid in the prevention of terrorist activites and intelligence collection’.
But the FBI’s 16-page response to the question by Inkoo Kang is heavily redacted, with information about the technology being used to secretly gather the information being blanked out.
The revelation comes as the 29th Burning Man takes place in the Black Rock Desert in Nevada.
~infowars.com/undercover-fbi-agents-spy-on-burning-man-festival-to-prevent-terrorism-test-out-new-intelligence-collection~
~~~~~~

Afternoon yowls and mews, late-summer sensational KitKats... so, the tame prairie has heated up again, but so far, it's not a nasty heat... but certainly more summer like... so, the Kougaress is enjoying the butterflies and birdies, and walking through her little back-to-nature spot... and she's trying to get her ducks in a row for the upcoming winter... with all the chaos-breakdown of society, who knows what is down the proverbial pike... and wow, the insomnia has been brutal for the last few nights... this Big Cat is looking for better solutions... one more thing to do on her overcrowded to-do list... but that's life in these quickening times.

Keep preparing for the superstorms of life, most darling kittens. It's getting rougher and nastier out there. But just remember this Big Cat loves ya!
~~~~~~

And, she has gotten some good penning done on her two WIPs... may the Divine smile on her so she can continue.
~~~~~~

Hold That Pose
by Pat Cunningham

Alessandra Moore sipped her drink and let her gaze wander over the other diners in the Rocky Top Motel’s restaurant. She tried to look with her casual, I’m-not-working-right-now eye, but her professional, let’s-see-what-we’ve-got-here eye kept getting in the way. That tended to happen whenever Less found herself between jobs. Like now.

Overall, the pickings here were slim. Well, she should have expected that from a motel restaurant off an interstate exit in rural Montana. Transients, truckers, businessmen on their way to one coast or the other and families on vacation weren’t going to yield many possibilities. As for the locals, forget it. They were attractive enough, in a rugged, animalistic sort of way, but the cowboy look was over and had been even before she left Chicago. If she was going to wow ‘em in LA, it wouldn’t be with anyone she found in this backwater cowtown.

Really, can you believe this is the first day of September? Gosh, time isn't flying, it's at quantum speed.

Tagline: Ex super-soldier boy meets winged filly girl. Will they live happily ever after? In Talbot's Peak territory anything is possible.

Their lips broke apart as Drev tangled his fingers deeper into hair. He quickened the strike of his cock, the rhythm still a smooth ebb and flow.
~~~~~~