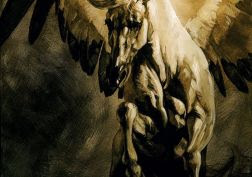 Yep, that is the constant theme of my life: BUSY, TOO BUSY. But no, I'm not alone since that's obviously true for most of us in these times. Chilly today on the tame prairie, but not wintry, which is a very good thing!

Drev Zander aimed his hunting rifle, alerted by the telltale gobbles of a wild turkey. He followed the sound of rustling inside the densely woven wall of brush and branches.

As the young tom, knowing he was prey, broke into the clearing, Drev targeted the emerging flurry of wings.
About to the pull the trigger, his jaw dropped instead.

The rifle fell from his line of sight. "What the 'f'?" left his mouth as clouds of steam.

First, a giant burst of light struck his eyes. Next, a white-winged, pale purple horse galloped between him and the only turkey he'd been able to track for days.

Like mist, the beautiful ethereal creature vanished from view. Yep, gone in a twinkling flash. But not before Drev caught the scent of lilacs and musky equine.

The mix of enticing fragrances lingered. Staggered, he scanned the immediate area.