The Lonely Hearts Club and the She-Wolf

Shapeshifter lovers, here's a Valentine Flash-Blast from my past. I was searching for images, and found my own flash scene at a blog I used to post on regularly, called the HAPPILY EVER AFTER blog ~happilyeverafterauthors2.blogspot.com/2012_02_01_archive.html~ This scene was also written during the old timeline prior to Wolf Peak Territory. 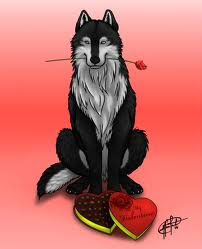 Here's a flash scene I wrote for Valentine's Day at the Midnight Stardust Supperclub.
~~~~~~
The Lonely Hearts Club and the She-Wolf

"Lonely Hearts Club," Sarielle whispered once she mentally translated the words from her language to the planet's American English language. "That's me."

Ever since leaving on this intergalactic tour of other wolfen shapeshifter worlds, Sarielle had practiced speaking the various languages while studiously learning about the many different cultures. Now she glided along the fringes of the supperclub's dance floor.

Whirling embraced couples, all of them in what she identified as a deep romantic trance, danced to a type of music she found heart-stirring and pleasurable. The playful but elegant notes made her feel deliciously supple.

Sarielle also listened to the lovely silken swish of her long gown as she approached the special area where men, all in full humanoid form, and clothed in what were called tuxedos, took turns partnering the women who, like her, obviously had no man or mate in their life.

What she thought was called a midnight buffet had been placed in this Lonely Hearts Club area. As well, sparkling beverages of all kinds spilled into stemmed glassware. Her nose inhaled a feast of fragrances, especially the quite virile man who began striding toward her as if he'd caught her scent and now hunted her.