The thing about Marissa ... 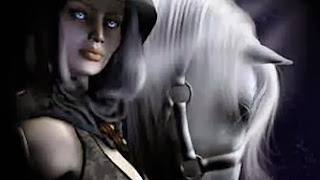 The nearly full moon blazed high in the midnight sky, an unnatural light to Sibelle's knowledgeable eye. Alarm chilled her blood. Gently pulling on the reins she halted the magnificent, pale gold stallion she rode.
~~~~~~

Coming up on midnight mews, Halloween spook-fabulous Kittens... chilly Autumn day on the tame prairie... the Kougaress has a large pokeberry plant growing outside her window... which she leaves to feed the birds... anyway, this afternoon she watched several cardinals, girls and boys, flitting on and off the pokeberry plant which is abundant with berries... one cute cardinal girl used it as a perch to look around for a bit.

Take care, darling kittens, and watch out for each other. 'Cause this Big Cat loves ya!
~~~~~~

Authoress news and mews ~
The usual business around being an author today... gosh, the Kougar so wants to get finished revising RED LIONESS TAMED, and git'er done. She has so many WIP projects that she wishes she could get to, and complete. Yeeeowwws!

Deep Emotional Impact... The thing about Marissa ... this flash scene is an in-depth portrait of Marissa, our beautiful blue-haired witch, who owns Java Joe's in Talbot's Peak.

The thing about Marissaby Rebecca Gillan

Mooney looked up from the beer bottle he’d been alternately nursing and peeling the label off of to see Mayor Gil walking up to him. He nodded once and then chugged the last few swallows before waving the empty over his head. By the time Gil had made it over to the back booth he’d taken over, the waitress was arriving with a tray of five more. She didn’t take the previous empties, though. He’d chased her away the first time she’d tried to.

“You’ve got about $20 left on the Benjamin you started off with, Moon-dawg,” she said flirtatiously as she set the next round down on the table. He didn’t reply, so she shrugged and went away.

“You planning on tipping your wait staff?” Gil asked archly as he slid into the booth opposite him.

“I tipped both her and the bartender when I first came in,” he rumbled.
~~~
HALLOWEEN FUN WITH STEAMPUNK AT COFFEE TIME ROMANCE ~

Be there for the fun and prizes and bad jokes!

AUTHORS/READERS... interesting article about the...

Is sandy imprint proof of bigfoot? Man says sasquatch has moved next door

The owner of a remote home in California's rural Tehama County says a bigfoot has moved into the woodland behind his house.

The man, named only as Ken S to protect his identity, says the sasquatch arrived about two weeks ago and has been throwing rocks at him and responding to hunting-style calls.
When Ken called in a team of experts to investigate, they found a footprint and claimed to catch the mysterious 15ft tall creature on an infrared camera. ~dailymail.co.uk/news/article-2473148/Is-sandy-imprint-proof-bigfoot-Man-says-sasquatch-moved-door.html
~~~~~~