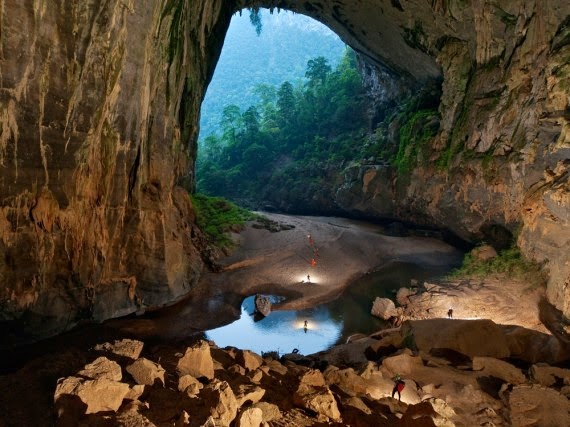 The Lost Forest World of the World's Largest Cave
We are exploring the forests, mountains, and seas of the world at an ever growing pace, and the ancient places that once lied in pristine remoteness beyond our grasp are being uncovered for all to see. But what of under our feet? What of the lost realms of the deep places of the world? In the case on one massive cave in Vietnam, a lost, prehistoric world sat hidden for millions of years deep under the forest floor until pure happenstance started our first steps into a place that time forgot.
Brent Swancer details the breathtaking wonders of China's Son Doong cave.

Approaching the jungle of Son Doong cave. Again, those little red specks along the bottom are people  ~mysteriousuniverse.org/2014/09/the-lost-forest-world-of-the-worlds-largest-cave~
~~~~~~

Late night mews, most spectacular and spunky Felines... a beautiful Indian Summer type day on the tame prairie, and the Kougaress enjoyed some of the wildflowers that are blooming, and adorn her long drive... gosh, is this Big Cat yawning and worn out now... and so ready for a night's snooze...

Okay, darling kittens, the world is racing toward only the Divine knows what... so keep those claws sharp and ready. And keep your loved ones close. Also, don't forget to prepare to hunker bunker down if needed. Always remember this Big Cat loves ya!
~~~~~~

Another couple of chapters have been polished with about four more to go, then the Kougar hopes to get this mss written under the pen name, Stevie Klark, submitted. She aimed for a 20,000 word novella... however, it's already close to 30,000 words. Let's see, the computer count says 29,223 words so far.
~~~

FLASHBACK ~ Freedom was a beast she wanted to ride.
By Savanna Kougar
Mid-September howls and yowls, shapeshifter lovers.

First, take a look at this new Nessie sighting.

HEADLINE-SNIPPET: Is this the Loch Ness monster?
Is this the Loch Ness monster – spotted 150 miles from its traditional home?
Photographer Ellie Williams captured this amazing image of what she believes to be a creature from the deep while taking snaps in the Lake District.
The 24-year-old had set up her camera tripod to automatically take photos throughout the day at Windermere.
It was only when she reviewed the images, which were supposed to be of the colours of the changing seasons, that she came across the shocking snap.
—mirror.co.uk/news/weird-news/loch-ness-monster-creature-photographed-4204637~
~~~

Then, here's a flash-scene I wrote back in August 2011. Since it follows the *lone wolf* theme Pat intro-ed for her Monday flash, I thought you might enjoy it. Plus, I added a little update.

Anyhoo, I need time to finish polishing my mss, Ride the Roan Stud, so I can submit it, then move onto the my next WIP. I've been begging for an out-of-time closet where I can write to my heart's content, then simply step back into current time... but, so far, my request to the writing goddesses and gods has fallen on deaf ears... yeah, maybe, someday. ~silly grins~

Freedom was a beast she wanted to ride.

“Get yer motor runnin’... head out on the highway,” Kristy screaming-sang the words of the Steppenwolf song playing in her head. She barely heard them because they were whipped away by the blast-furnace winds on either side of her.

Why she’d hopped astride her Harley, roared it into gear, and taken off down the nearest highway beneath the high noon sun... well, she knew why. Freedom was a beast she wanted to ride.

KEEPING THE INTERNET FREE AND FAIR AS POSSIBLE 'NEWS' ~

Action Alert! Keep the Internet FREE from FCC Regulation
Activist Post - There are many threats to our free and open Internet access, and we have made great strides in preventing some of them, but we need to be louder than ever now. For those who might not be familiar with what is at stake please read the following link, which contains a key video as well...
~~~~~~

Why You Should Think Twice Before Using Facebook’s Messenger App
Michael Krieger | “Messenger appears to have more spyware type code in it than I’ve seen in products intended specifically for enterprise surveillance.”
~~~~~~

HEADLINE ~stevequayle.com~ How Apple Is Invading Our Bodies: The Silicon Valley giant has redrawn the line that separates our technology and ourselves. That may not be a good thing
~~~~~~

Stanford engineers aim to connect the world with ant-sized radios
stanford.edu - A Stanford engineering team, in collaboration with researchers from the University of California, Berkeley, has built a radio the size of an ant, a device so energy efficient that it gathers all the power it needs from the same electromagnetic waves that carry signals to its receiving antenna – no batteries required.
~~~~~~

How Technology, Not Shovels, Revealed What Lies Beneath Stonehenge
A look at how magnetometry was used to study the infamous and enigmatic esoteric monument. — io9.com
~~~~~~

BE CAREFUL OUT THERE, WATCH OUT FOR THE SLEEP WALKERS 'NEWS' ~

Norway: Four-year-old sleepwalks 5km to nearby town
Dreaming that her house was on fire, young girl manages to walk over three miles while sound asleep. — BBC News
~~~~~~