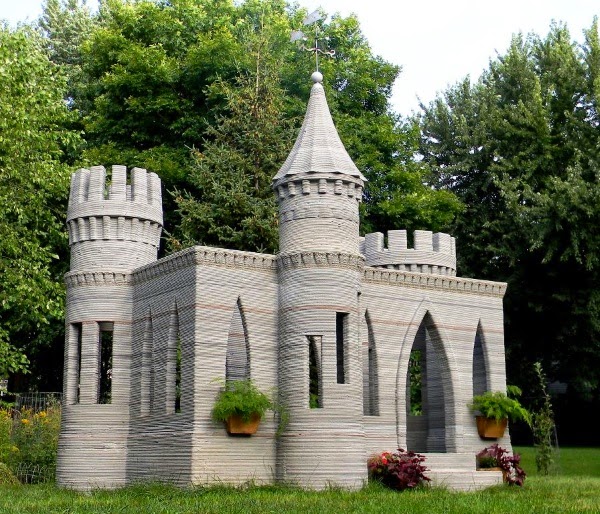 at SHAPESHIFTER SEDUCTIONS ~
Cute 3D Castle... we all need one, right?

Minnesotan man builds the world’s first 3D printed concrete castle in his backyard
3ders.org
September 1, 2014
In Minnesota, contractor Andrey Rudenko is currently working on a project of gargantuan proportions that seems to be stretching and exploring the limits of 3D printing technology. Using a printer that was substantially modified and expanded, he has printed a concrete castle in his own backyard. And at 3 by 5 meters, this concrete structure is the world’s first 3D printed concrete castle, and one of the largest objects that has, up till now, ever printed with 3D printing technology. ~3ders.org/articles/20140826-minnesotan-world-first-3d-printed-concrete-castle-in-his-own-backyard.html
~~~~~~

Nighttime mews, precious and purty KitKats... hope you had a lovely Labor's Day... rainy on the tame prairie right now... but most of the day was just cloudy, the temps cooler... last night the lightning and storms moved in, and there were some nice soaking rains... wow, what a wacky past couple of days for this Big Cat... one of those times when the messes of living life hit one after the other... or so it seems... it's calm for the moment, and since early this afternoon. ~whew~

So, darling kittens, times are only getting tougher for most of us. If not you, that's a good thing! However, new way-out-of-the-box opportunities are here, and for a lot of us it's time to change course. Always remember, this Big Cat loves ya!
~~~~~~

“As can be,” Ewan assured her. “Shaggy and Agent Mulder—I guess that’s Barry and Lowenstein—got run out of town days ago. Jumbo Dumbo’s been sent to a place he won’t be coming back from. Cochrane won’t be back if he knows what’s good for him. Your friend Pete, or whatever he is now, was seen headed for the tiger compound. They’ll deal with him, one way or the other. Zhere Ghan likes to keep a low profile. I think that’s everybody.”
~~~~~~

Hidden "Base" Under The Pacific Discovered? Mysterious Red Glow Remains Unexplained (video)
Hidden CONTRIBUTOR: Wake up America - All News PipeLine. By Susan Duclos - All News PipeLine This one definitely goes under the strange and unusual file as we see multiple reports of a "mysterious" red glow, captured in amazing images (shown below) which has pilots flying over the area baffled. According to Dutch pilot JPC van Heijst,...
~beforeitsnews.com/strange/2014/08/hidden-base-under-the-pacific-discovered-mysterious-red-glow-remains-unexplained-2457908.html
~~~~~~

First robot astronaut 'lonely' in space
Scientists in Japan find that Kirobo the first robot astronaut is 'lonely' after his astronaut companion returned to Earth. Kirobo was recorded saying: "I'm a little tired, so I think I'll rest a while, but I hope you'll look up at the sky sometimes and think of me." — The Telegraph
~~~~~~