A woman walks into a bar. 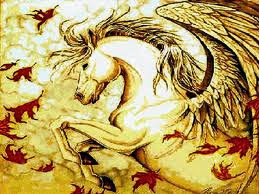 at SHAPESHIFTER SEDUCTIONS ~
Late night mews, Autumn-adorable KitKats... a lovely warm day on the tame prairie... the Kougaress could live with these kind of temps everyday... early evening at sunset this Big Cat saw the beautiful crescent moon high in the southwestern sky... yesterday she gathered up two buckets full of apples from her organic apple trees... and there's a lot more to go... every apple she's eaten so far is just absolutely delish, and is the Kougaress ever grateful... the wild critters have been munching on them too... but there seems to be enough for all of us.

Enjoy the harvest abundance of Fall, darling kittens. And keep stocking up for winter. Always remember, this Big Cat loves ya!
~~~~~~

The Kougar penned Volcano's Weekly Angelic Forecast... which is posted at Kougar Kisses below, and at these two sites ~ sirenbookstrand.blogspot.com & ~ titlemagic.blogspot.com ~

So, the Kougar searched the term 'Pegasus Warrior' for an image to use with Volcano's Weekly Angelic Forecast, and found some fabulous fantasy art which she thoroughly enjoyed checking out for some break time today.
~~~

Justifiable Herpecide
by Pat Cunningham
A woman walks into a bar. She wears a heavy cloak with the hood pulled up to hide her face—not out of a need to remain anonymous, but out of shame and a growing anger. The anonymity might come in handy for later, she reflects, and leaves the hood up.

The person she seeks sits casually at the bar, nursing a margarita. The woman slides onto a stool beside her target. The target glances her way, one eyebrow raised. “It’s my husband,” the woman says. “This time he’s gone too far.”

She orders a beer. The two sip their drinks and speak in low tones. Eventually an agreement is reached, and money is exchanged.
~~~~~~

An incredible new map attributed to Marco Polo may reveal that the 13th century Italian explorer discovered America more than two centuries before Christopher Columbus set sail for the New World. Crude illustrations on the sheepskin map show what appear to be Alaska, the Aleutian Islands and the Bering Straight. One expert has claimed Polo even traveled to Washington state and Puget Sound. Get more details at
~dailymail.co.uk/news/article-2769708/Map-shows-Marco-Polo-discovered-America-13th-century-200-years-Christopher-Columbus.html
~~~~~~

Under Rainier’s crater, a natural laboratory like no other
Below the ice cap at Mount Rainier’s summit lies a network of otherworldly grottoes explored this summer by scientists and cavers.
By Sandi Doughton
Seattle Times science reporter
Counting all the ups and downs, he had climbed more than 15,000 feet to get here — past yawning crevasses and over cliffs where a single misstep could send a rope team tumbling. His party was pummeled by a lightning storm so ferocious it stood one woman’s hair on end. Gale-force winds threatened to shred their tents. ~seattletimes.com/html/localnews/2024638286_rainiercavesxml.html
~~~~~~

On the Hunt for a Sprite on a Midsummer’s Night
Armed with sensitive cameras and radio telescopes, Thomas Ashcraft hunts for sprites -- majestic emanations of light that flash for an instant high above the thunderheads. — NY Times
~~~~~~

YEP, A LOT OF THE CULTURE WAS FAR DIFFERENT THAN POPULARLY PORTRAYED 'NEWS' ~

Did the Vikings Get a Bum Rap?
A Yale historian wants us to rethink the terrible tales about the Norse. — National Geographic News
~~~~~~

HEADLINE ~stevequayle.com~ Mystery of the Pentagon space plane that has been circling the planet for TWO YEARS: Experts are trying to uncover details of its classified mission
~~~~~~