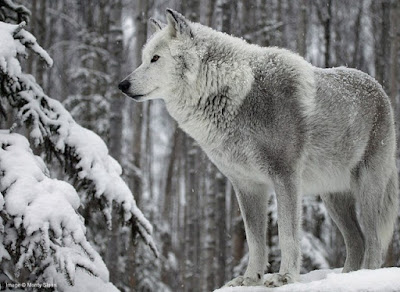 Say goodbye to 2015! Yep, the year was almost a whirlwind. And likely 2016 will be the same, as far as this 'quickening' speed.

Once again, it took me all day to write this flash scene. As usual, just too many interruptions. Anyway, Kazsmere and Dyntr are two new characters in Wolf Peak Territory.  Maybe, they'll be celebrating the New Year together. ~smiles~

"No!" Kazsmere wailed. Her heart thumped in that way when she knew something horrible had just happened—a feeling she was all too familiar with in her short life.

Panic fueled her, and she running-crunched through the near foot of snow, toward the bent-trunk pine tree. He lay on his side, his body freezing in the close to zero temps.

Kazsmere fell to her knees immediately. She wrapped her arms around his beautiful fur body, hugging him close. He was dead. She felt it, knew it.

His breath of life was gone.

Hadn't he told her his time had come? Over the past several months, he'd embraced her in his fatherly manner, saying, "It's a good day to die."