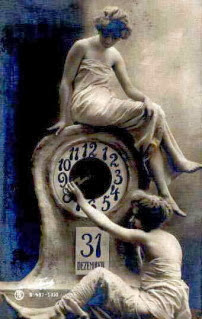 “Great Caesar’s goat!” Nick roared. at SHAPESHIFTER SEDUCTIONS on Monday.
Monday evening mews, New Year Feline lovelies... it turned brrrr-cold on the tame prairie again, and for awhile the skies were ugly, weird 'shades of  gray' before it cleared to blue skies... last night, though, the stars were absolutely dazzling in the heavens... since the Kougaress doesn't do the resolution thing, nothing exciting in that department... but here's a mental toast to whatever resolutions you're making.

Lots of dangers out there, darling kittens. So take care, and beware. 'Cause this Big Cat loves ya!
~~~~~~

The Kougar penned Volcano's Weekly Angelic Forecast... check below at Kougar Kisses, or at these two sites ~ sirenbookstrand.blogspot.com & ~ titlemagic.blogspot.com ~

And she's debating what to post for Tuesday at SHAPESHIFTER SEDUCTIONS since it's New Year's Eve day. She might reveal her new cover art for her flash-scene novel, *His Claimed Bride, Happy New Year On Another Earth*

End of an Era
by Pat Cunningham

“Great Caesar’s goat!” Nick roared. Which, according to legend, Caesar had eaten grilled with a side order of fries. Nick vowed whatever was making that ear-splitting caterwaul would suffer the same fate.

He burst out of his office and into a scene straight out of a horror movie. Ralph Bruin, movie reviewer and writer of op-ed opinion pieces, was throttling the life out of a plaid canvas bag with pipes stuck in it. The bag shrieked a death knell that could probably be heard all the way to Missoula. Apparently his staff was celebrating the object’s demise, because they were gathered (not all that closely, he noted) around a desk with a sheet cake on it. Black balloons had been tethered to the chairs.
~~~

HIGH STRANGENESS 'NEWS' ~
HEADLINE ~stevequayle.com~ Was he trying to make a trunk call? Teenager finds face of lovable alien E.T. in a LOG : Three other sightings of adorable alien's face in tree trunks have occurred
~~~~~~