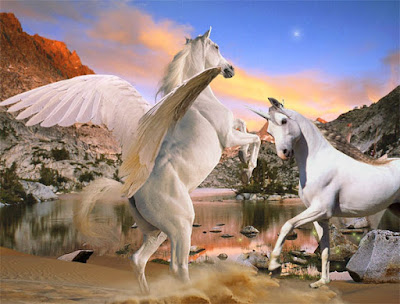 So, good intentions be damned today. I'd planned to get this first draft of my chapter written and posted in a much more timely manner. But no such luck. I had to do an emergency fix-up job, and to do it, I had to dig through stuff to find what I needed... and so on, and so on... then, the day went wacky-busy from there.

Drev glued his gaze on Keina as she galloped over a flat stretch of ground. Her sheer beauty as winged horse bewitched him. No doubt, bewitched him.

Symone rode on his filly's back as if she'd been born to it. Earlier in the day, the two of them had gone on a long test flight, which had been declared successful.

Enchanted by the flapping of her pale glimmering wings, Drev watched Keina launch skyward. Her lush tail flowed like a silvery banner, and her magnificent wings strongly beat the air.

Drev felt his spirit soar with her.

Quicker than he liked, Keina and Symone become super tiny in appearance, a gleam against the star-filled night sky. The plan was to sharpshoot from on high.

Wishing you love and passion on the wild side ~