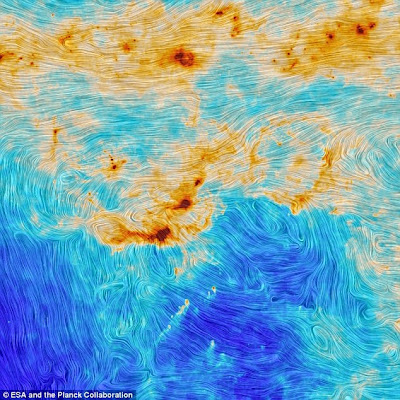 at SHAPESHIFTER SEDUCTIONS ~
Isn't this incredible?!

That's a masterpiece! Image of stars forming in a dusty universe look uncannily like Vincent van Gogh’s The Starry Night
It looks like another of Vincent van Gogh's masterpieces, with swirls of paint and bright colours.
However, in fact this depicts the formation of stars in the turbulent billows of gas and dust of the Orion Molecular Cloud.
Experts admit the similarity to Vincent can Gogh's Starry Nights is striking...
The image is based on data from ESA’s Planck satellite, which scanned the sky between 2009 and 2013 to study the cosmic microwave background, the most ancient light in the Universe’s history.
While doing so, Planck also detected foreground emission from material in the Milky Way, as well as from other galaxies.
This image combines a visualisation of the total intensity of dust emission, shown in the colour scale, with an indication of the magnetic field’s orientation, represented by the texture.
~dailymail.co.uk/sciencetech/article-3086995/That-s-masterpiece-ESA-reveals-image-stars-forming-looks-uncannily-like-van-Goghs-Starry-Nights.html~
~~~~~~

Afternoon mews, most valued and valuable Felines... it's been rainy and cool on the tame prairie... certainly not summery feeling... the other day this Big Cat saw one of the golden eagles flying down the long drive between the arched treeline... and last week, she startled a young turkey, by the looks of him as he flew away, flying close to the ground... so, the Kougaress just can't keep up in these ever Quickening times... thus, likely, her blogging will be spotty... that is, if life continues the way it has... not that that will matter to most... but just to let anyone know who happens to care.

The Kougar did get *obviously* some done on her HIS SEX PET WIP, and the scene ideas are flowing at this point.
~~~

Curbing his raw impatience, and silently cursing the enlarged, throbbing state of his cock, Commander Droz strode through the pavilion's open-air entrance. Resplendent in outward appearance, the slave-commerce structure resembled a potentate's harem quarters – many which were still on the surface of the planetworld, Ovvabia. Although, in current times, the palatial buildings were entertainment centers featuring the artistic talents of women.

Droz's long quick stride carried him to the red ecstasy room, one of the center cubicles in the humanoid female section. Wispy trails of an exotic incense, meant to heighten carnal need, caused his nose to twitch. He snarled under his breath as his breeding shaft painfully lengthened again.
~~~~~~

A HUGE GLIMPSE BEHIND THE SCENES OF THE BREAKAWAY CIVILIZATION 'NEWS' ~

BLURB: In the latter half, retired U.S. Air Force pilot Donald M. Ware spoke about the shadow world government, Inner Earth, ET agendas, Atlantis, and secret histories. He cited that the NRO (National Reconnaissance Office) among other agencies is behind the shadow government, and that they control and manage much that the public is unaware of such as bases on the moon, and Mars, as well as undersea and underground facilities here on Earth, that are inhabited by a hidden advanced society. 50,000 Germans escaped at the end of the WWII and many of them went to South America and hidden facilities, Ware contended.
Admiral Byrd, who came with a military contingent on an expedition to Antarctica in 1947, was picked up by a tractor beam, and there were German markings on the flying saucers that shot down some of his planes, according to one of Ware's sources. Ware also shared some of the "secret history" related by John Leith, an OSS officer in WWII, such as the Nazis having access to higher forms of technology. Hitler escaped, and surprisingly spent the last 35 years of his life as Catholic priest in Ecuador, Ware declared, adding that "I have a very good friend who took communion from him twice." For Ware's take on ETs, check out this video clip.

In this clip, 5/18/15 guest Donald Ware, a UFO and consciousness researcher, expounds on his idea that ETs are involved in a long-term plan to upgrade the "human computer." ~coasttocoastam.com/pages/donald-ware-video-clip~

THE ANUNNAKI PAST REVEALING ITSELF 'INFO' ~

BLURB: ...scientist and researcher Michael Tellinger discussed the Anunnaki, an ancient ET race he believes created humanity through genetic tinkering to serve as slaves for their gold mining operations. As evidence for the Annunaki's presence, he cited the massive number of ancient stone circles found in South Africa, and Zimbabwe, which date back at least 300,000 years. The circles vary in size from 15 feet across to 450 ft. and Tellinger believes they originally functioned as energy generating devices, though in more recent times some of them have been converted into dwellings.
Just recently someone was drilling in a South African mine, when a wall collapsed and revealed an older mining tunnel that was made with such precision that it could not have been constructed with current technology, he reported. The Anunnaki used a silicon-based technology that incorporated sound and resonance as a source of energy, he continued. The timeline suggested by Zecharia Sitchin for the Anunnaki genetic experiments (around 300,000 years ago) falls in line with the first emergence of homo sapiens, he added. As humanity evolved and started reaching higher levels of consciousness, the Anunnaki became concerned and took away their language (this is what is called the 'Tower of Babel' event), Tellinger explained. ~coasttocoastam.com/show/2015/05/19~
~~~~~~

THE DARK-SIDE'S WAR AGAINST MEN AND WOMEN 'NEWS' ~

Neomasculinity: The Male Backlash Against Toxic Women
Paul Joseph Watson | Should men be ashamed of masculinity?
~~~~~~

THIS IS A COOL WAY TO SALVAGE ART 'NEWS' ~

Ghosts are scaring staff away from luxe rental building
Tuesday, May 19, 2015
Doormen have been quitting their jobs at a luxury rental building in Brooklyn that was once a hospital, sources said, spooked by eerie visions, sounds and even smells. — New York Post
~~~~~~

UFO Spotted Circling Mysterious Lights on Ceres
Tuesday, May 19, 2015
The mysterious lights on the dwarf planet Ceres are apparently of interest to more than just the Dawn spacecraft currently in orbit around it. — Mysterious Universe
~~~~~~

Humans have shorter attention span than goldfish, thanks to smartphones
London Telegraph | A Microsoft study highlights the deteriorating attention span of humans, saying it has fallen from 12 seconds in 2000 to eight seconds.
~~~~~~